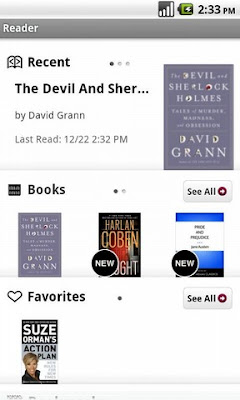 There is a clear move away from the single platform ereader offer, to one that is capable of rendering ebooks on all platforms. This doesn’t kill off the dedicated ereader devices and in a weird way, if anything, makes them more relevant. The question you must now ask is why would I buy a ebooks that only play on one device?

Amazon long understood this and along with others such as Google, Kobo and Barnes and Noble now have a platform offer. However many who entered the market from the hardware perspective now find themselves with a delimia – are they hardware manufactures or booksellers or platform service providers? This starts to separate the serious contenders from the also rans. The devices, from the service.

The only viable glue which offers the manufacturers some opportunity to extend their services is Adobe’s DRM ACS4. ACS4 is very prevalent in the eInk world, was born in the PC world of Adobe’s Digital Editions and now, thanks to developers such as Bluefire and TxTr, is becoming available in the mobile world. The question is what or who is driving the extension of the platform and who owns the service as it moves multi platform?

Today we read that Sony, who along with Overdrive, were one of the primary instigators of ACS4, have finally got their offer onto a mobile. The offer includes ACS4 but today is restricted to Android 2.2. We find ourselves asking yet again where Sony are going? Like those dull people you hate to strike up a dialogue with at a party, try hard to project themselves as interesting and someone to be with they, but continue to be dull and follow not lead. Unfortunately, one fears that like their other past products, such as Betamax, they have lost the plot, or like Walkman, are now past their sell by date.

The Digital Reader reports that they have apparently made a mistake in saying their app is available on the iPhone and IPad, which it should be if they are using Bluefire to develop it. Alas, it apparently isn’t . The question of which Andriod platform supports the app is also a mute point, given that a significant number of smartphones have yet to reach 2.2 and are languishing on 2.0 and 2.1.

Mobiputing have a review of the new apps performance and look and feel and we were somewhat taken aback to learn that it takes up 8MB of storage after moving it to the SD card, which anyone with an Android phone will realise, can be a significant issue.

The challenge for Sony is not extending the service for existing users of the Sony Reader Store to allow them to synchronize their bookmarks, highlights, and reading between mobiles and Sony readers, but getting new users to use their platform and buy ebooks from them and also buy their ereaders. However, there appears to be little compelling reason, or differentiator for people to buy ebooks from Sony’s relatively small selection of titles (we dismiss the Public domain fillers that they even charge for) and their devices are just the same old eink ‘lookie likies’.

We would ask Sony where they see their ebook offer going and what is compelling about their offer today and tomorrow?
Posted by Martyn Daniels at Saturday, January 22, 2011