Samsung’s Galaxy Note: a Smartphone, or a Tablet 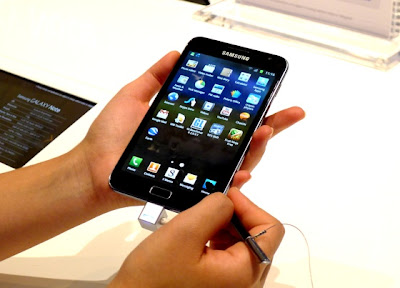 Korean giant, Samsung has many supporters of its leading edge technology and its smartphones today are second only to Apple in terms of sales. Samsung's net profit last year was over five times the combined earnings of Japanese rivals Panasonic, Sharp, Toshiba, Hitachi and Sony. Its total sales in 2010 of $136.6bn (£83.5bn) made it the world's biggest technology company by sales, but its market capitalisation is but a third of Apple.

Samsung are still one to watch and therefore their new Galaxy Note is worth some attention.

On 17 November Samsung’s Galaxy Note hybrid will hit the UK’s streets but the question is whether it’s a smartphone or a mini tablet or just something to be admired? It has a 5.3in HD Super AMOLED display with 800x1280 resolution, which makes it the smallest tablet and the largest smartphone. It has a 1.4GHz dual-core processor, runs Android 2.3 Gingerbread and also has an 8MP camera, a 2MP front facing webcam and even a 'Smart Pen' stylus for control and on-screen scribbling. The basic 16GB of storage can be expanded via the microSD card slot and it weighs in at 178g and is 9.65mm thick.

For Android lovers this may be the new leader of the pack.

Meanwhile Samsung’s still lacks that Apple 'X Factor' image and Apple continue to claim in the courts that they have copied its iPhone and iPad designs. Samsung has even offered to remove some features from its Galaxy Tab 10.1 in an attempt to overturn a court-imposed sales ban in Australia brought by Apple. It is rumoured that
Samsung has also made an offer to settle the dispute between the two firms which has reduced from the original 13 separate patents to only three.

Samsung and Apple currently face each other in courts in the US, Germany and the Netherlands.
Posted by Martyn Daniels at Monday, October 03, 2011