Amazon Take All Of LoveFilm 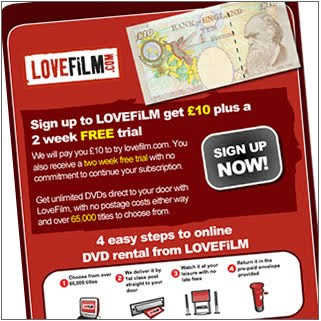 If you already own 42% why not close the door and buy up the remaining 58%? That’s what Amazon effectively have done today in acquiring the remaining 58% in European film rental operator Lovefilm in a deal that is suggested to be around £200m. Amazon originally bought a 42% stake in Lovefilm in 2008.

Lovefilm was formed in 2004 as a film club sending DVDs to customers in the post and has now expanded into streaming digital movies to TVs and PCs and renting video games. It has some 1.6 million members in the UK, Germany, Sweden, Norway and Denmark.

Amazon clearly are eyeing up the wider media space and outside Europe, see US operator NetFlix, with a market capital of around £9.7bn and 16 million subscribers as both a potential threat and opportunity.

Despite having a very strong, stable and growing core business in DVD by post, Lovefilm has stepped up its movie streaming business, declaring that online was now its "primary" business. Equally, Netflix has announced its intention to expand, with Europe and the UK being a natural next step after Netflix Canada. Netflix's movie library is significantly larger than Lovefilm’s but Lovefilm should now be in a stronger position to defend itself against Netfix’s declared international expansion and with Amazon have a global brand and service leader.

This is obviously a good day for Lovefilm but we would suggest it is also a good day for Amazon who would want to have a global offer across all media.
Posted by Martyn Daniels at Thursday, January 20, 2011