What More Can Any Music Lover Want? 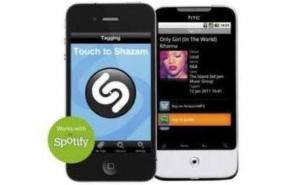 Two of the most successful and innovative music services Spotify and Shazam are planning to team up connecting Shazam users directly to music on Spotify.

For those who are not already hooked on the power of Shazam, it is a music discovery service that lets you hold your mobile device in front of a music source (radio, TV even live concert) and tells you from the ten million tracks in its huge database what the track is and details about it. For those who have not already been converted to Spotify, it is Europe’s innovative music streaming and peer-to-peer music service. Spotify has also recently announced that its application is now available on the Windows Phone platform, working over Wi-Fi and 3G connections

The new service will allow users to discover music on Shazam and the seamlessly click "Play in Spotify" and listen to full tracks. The new feature will be available for iOS and Android users in Europe. The service will initially be restricted to Shazam Encore but will available to the free Shazam later this quarter.

So if you now hear a new piece of music you can identify it and then listen to it instantly in its entirety and add it to your music collection.
Posted by Martyn Daniels at Sunday, January 16, 2011