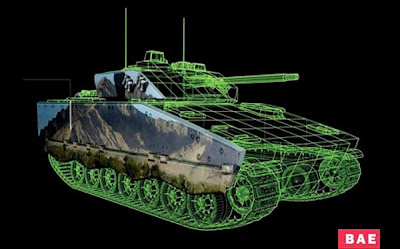 We had to remind ourselves it wasn't April's Fool Day when we read a rector in The Telegraph that UK defence contractor BAE Systems plans to cover British Army tanks with, not camouflage as we know it, but an E-Ink panel and believe that in doing so their surface may become practically invisible to the enemy on the battlefield.

We don’t envisage a tank covered with Sony and Kindle devices but one big sheet of eInk which is refreshed constantly. Cameras will constantly take pictures of the surroundings and project them onto the eink surface of the vehicle.

They promise a prototype by 2015 and obviously envisage full colour and not a greyscale tank in their coloured battlefield.

We can see all sorts of implications and questions such as:

If the enemy can’t detect them how can it own ground troops?
What happens if part of the screen starts to malfunction or is hit by a bullet?
Tanks aren’t exactly quiet and do tend to make heavy tracks and even kick up dust so would they seriously be invisible?
What happens if someone is standing up (like Margaret Thatcher once did)?
What about that long cannon?
eInk may be visible in bright sunshine but it's image is unlikely to be techo colour let alone HD or 3D and very static.


We believe that either someone has been sold a technology pup at the ministry, or they have forgotten we are in a credit squeeze.
Posted by Martyn Daniels at Sunday, January 16, 2011