We talk of wearable technology and see a deluge of wantabees who all want to be seen in their ‘Emporer’s New Clothes.’ But it often is frustrating that we continue to leave many behind in our search for the next best gadget to be seen with. We were taken aback years ago when we saw the ‘sixth sense’ development of Pranev Mistryand today some of the most exciting technology still remains with the likes of MIT.
This week, we read of a MIT’s finger device, which is not an iRing or iWatch mini, but a remarkable device aimed at helping the visually Impaired read and engage with the written word. It is still surprising that some ten years since we wrote the ‘Brave New World’ report and we envisaged the era of the audio digital. However, its mass adoption remains untapped and communities, such as the visually impaired, are still being left behind. We obviously saw then that it was a simple transition from physical audiobook to digital audiobook and although much has happened, little mass adoption either upstream or downstream has occurred. At the time, many saw print on demand and the digitalised text as offering the solution to large print books and specialised monitors, but again much has happened, but mass adoption hasn’t.
So what have MIT delivered with their FingerReader?
FingerReader is a device which today looks clunky and very much a prototype, but through its camera is capable of character recognition and real time audio delivery. Assisting the visually impaired with effectively and efficiently, reading paper printed and ereader text must be a goal to strive for. FingerReader addresses the issues of misalignment, focus, character accuracy, mobility and efficiency, introduces a new method of scanning text of single lines, blocks of text or skimming the text for important sections on the go, whilst giving the reader instant audio and a tactile feedback.
So what you may ask and how does this help others?
Well today the initial focus is no the visually impaired and can enable the blind to read without the need for Braille, or the visually impaired to read without large print or blow up monitors. But the technology offers much more to all and takes us one step further towards the true wearable and tactical interfaces we lack today. Imagine just pointing you finger at text and hearing an instantaneous playback and also capturing the text at the same time. We would suggest that this is far more useful than creating a digital watch.
Imagine, joining the dots between speech recognition and controls, OCR, Audio and all in the pocket package of a smartphone.
Currently, FingerReader needs to be connected to a laptop, but the researchers are now developing an open-source version that will be able to use Android phones. Now that really opens up wider opportunities for all.

To read the MIT Paper; FingerReader: A Wearable Device to Support Text Reading on the Go
Posted by Martyn Daniels at Tuesday, March 17, 2015 1 comment: 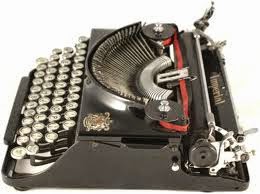 I have just bought a 1936 Imperial Companion 1 portable typewriter and it now sits proudly on my desk alongside today’s technology. Is it practical? Well not with my poor spelling and tendency to rework things. Does it work? Yes and has a black and red ribbon which will one day need replacing. Did I buy it to work? Well not really, I thought it of it as more of a fusion of art and technology and a statement. The typewriter played a major role in influencing where we are today. With my wife being granted a Royal Warrant for her bookselling, I also love the Royal Warrant stamp on the Typewriter dedicated to the late King George V.

So what has this to do with last week’s latest technology announcement of an iWatch from Apple?

Well no one will expect the iWatch to survive nearly eighty years and work. With our consumable technology today it’s hard to find one of those early brick mobile phones let alone some of the early portable PCs and the life expectancy of many is a mere few years. However, it is possible to see the iWatch as an evolutionary step to shrink technology, change app development and create a fashion icon to rival the Sinclair C5, Delorean car, Google’s Glass and others. But as an investment it is very high risk and not even a gamble.

Apple has with the iWatch put a placeholder on the market re wearable technology. The iWatch itself is not the first technology watch, remember those very first digital watches and more recently the eink ones and even more recently the competitors to the iWatch. Apple has the clout and the followers to sell enough to cover their stake, but is it a game changer? Do you want to buy the mark1 version knowing mark2 is probably in the labs today and it will only have a life expectancy of some 2 years?

I look at my analogue Longines watch, it is a designer statement, practical and been around for many years. Would I replace it with a clunky piece of technology that says ‘look at me iam a geek’?

Wearable technology will happen but exactly how and when is debatable and the challenge it has is that it now has to compete with smartphones that can do everything it can do and much, much more.

Eink technology was transient and could never be anything else than a monochrome offer in a Technicolor world, but they established ebooks. Tablets were always going to be caught between the home and the smartphone and when the smartphone fits into a pocket and laptops became lighter and thinner, there was only going to be one mobile winner. Print on demand would show the potential to do short runs but fail to deliver the ultimate ‘distribute and print’ model.

So as devices themselves become ‘smarter’ and connected does the smartphone become the communications hub as predicted by our friend and futurist Ray Hammond? As Bluetooth and WiFi expand does wearable technology move close to the sensor nodes and speech, gestures, image and smell recognition become the real wearable technology?

Jill O’Neill, Director Professional Development, NFAIS, raised a interesting comment ‘Why can't Apple design and build the Star Trek tricorder instead?’ Now we both would be very interested in one of them!
Posted by Martyn Daniels at Tuesday, March 10, 2015 2 comments: