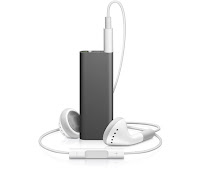 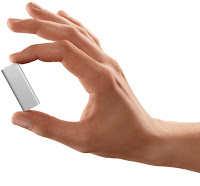 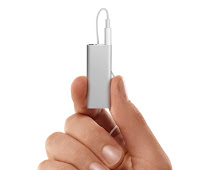 While the world was debating a new iTouch versus a Apple touch screen netbook, Apple brought out a talking iPod shuffle. The new stainless steel shuffle is half the size of the previous shuffle.

The fact that they can now squeeze up to1,000 songs, or play 10 hours of music on a single battery charge, on a device smaller than an AA battery, clearly demonstrates the shrinking technology. Forget buttons there is no room on the device itself and instead it is controlled by a button on the earphone cord, which enables users to play and pause songs, adjust the volume and flick through playlists.

The shuffle will also give you track information in up to 14 different languages, including Mandarin as well as English, and can automatically switch between providing battery or track information in English and pronouncing a foreign song title in the appropriate language. The question of whether the track information will be an interruption or a benefit is to be seen but the facility is novel and yet obvious. The other question is raises is why you wouldn’t know what track was playing as they are your tracks in the first place.

The 4GB shuffle will come in black or silver, and cost £59 and Apple will continue to sell the 1GB entry-level iPod shuffle, which can only store 240 songs, for £31.

The key is to obviously get the iPod shuffle controls built into a wide variety of headphones, from different suppliers and also provide adapter cables, so users can use your existing headphones with the new shuffle. After all you don’t want to throw away those white distinctive earpieces, do you?
Posted by Martyn Daniels at Wednesday, March 11, 2009