Another Day and Now a Samsung eReader 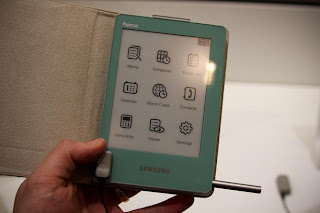 Samsung will launch a touchscreen e-book reader called Papyrus in Korea in June and potentially later in the U.K. and U.S.

The A5-sized e-ink device (5.8 x 8.3 inches), has an aluminum stylus and is rumoured to have only 512MB of memory with no memory-card slot, no Wi-Fi and no cellular WAN access. So little room for the library of e-books, PDFs or documents, and MP3 files and more importantly these rumors either don’t stack up or we are looking at a lame duck .The other rumour is the price, at under $300 it can compete but without the features again its relatively useless tin. 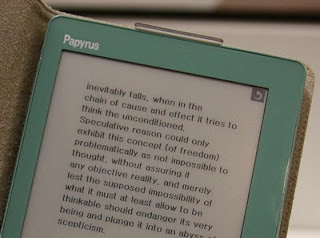 It is being touted as not just to be an e-reader, but a “notetaker, world clock, diary, memo taker, calculator, and contacts” but alas the rumours say a lot less than more. 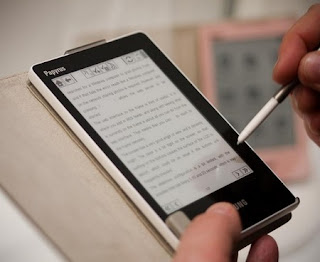 So the electronic companies from the Far East look to be wakening up and could drive down the price but its down to content and channels so it will be interesting to see who bits and what the final release looks like.
Posted by Martyn Daniels at Wednesday, March 25, 2009