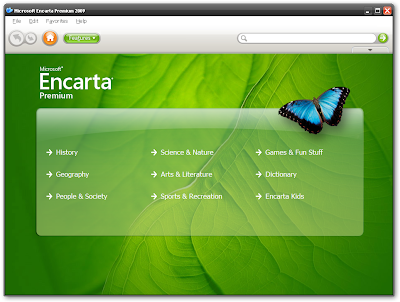 As a child we were haunted by those tomes Encyclopedia Britannica and the notion that a set of books would transforms any young student into a class topping genius. Also the books still linger on shelves in many family homes, or have long gone. Then in the 90s we had Microsoft Encarta. Who needed the tome when you could have it on a CD? Then came Wikipedia, who not only transformed access but more importantly democratised its development.

Microsoft has offered limited online selection for free and a much larger selection of 42,000 entries for a subscription, but are unable to compete with Wikipedia’s 2.7 million articles. It failed to grasp the concept of user generated content and editorial by democratisation.

Today, Ars Technica report that Microsoft’s Encarta, has come to the end of its life and will be no more. ‘On October 31, 2009, MSN Encarta Web sites worldwide will be discontinued, with the exception of Encarta Japan, which will be discontinued on December 31, 2009’. Microsoft says that the ‘category of traditional encyclopedias and reference material has changed…people today seek and consume information in considerably different ways.’

Wikipedia may have its faults but it is changing how we create, mediate, access, use and value the ultimate reference material. The question we now have to ask is what the next generation will be?
Posted by Martyn Daniels at Tuesday, March 31, 2009