Another show, another launch, more announcements and even more speculation on the ebook front. Following hot on the heels of the mobile piches in Barcelona comes CeBIT 2009 in Germany this week. What’s new and what are the rumours? 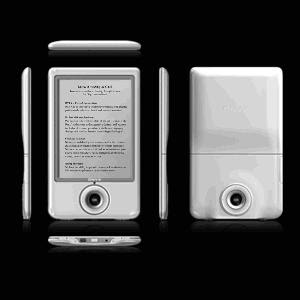 It sounds a funny name and is from Onyx International in China. The reader is not available today but Onyx are looking for OEM customers for their touchscreen for their 6, 8 or 9.7 inch touch screen sizes. Other features of the Boox eBook reader can includes Wi-Fi, plus the usual technology specification; CDMA 1XRTT, GPRS, 3G, 400Mhz CPU, 128MB RAM, 512MB Flash or more, a SD card slot, 2.5mm headphone jack and USB 2.0 with OTG. The device supports PDF, TXT, HTML, MOBIPOCKET, EPUB, CHM, PDB, JPG, PNG, GIF, BMP, TIFF, MP3, and WAV.

BeBook
Dutch company Endless Ideas launched their BeBook reader in 2008, and plan to launch its next-gen BeBook reader at the CeBIT show.

There are no pictures but it is claimed that the new BeBook model will include wireless connectivity, new touch screen navigation and RSS and also be capable of rendering to the new ePub DRM standard in the coming months.

Kindle 3
Having just started to ship the new Kindle 2 last month there are already runours of a Kindle 3 with Digitimes mentioning it in a story about PVI who delivers the display for the Kindle. Apparently later this year we should see a touchscreen Kindle that also with a larger display.

So we appear to be in a device war before we have the depth and range of content and while issues such as DRM, pricing have been resolved. An abundance of readers can only be good for maintaining the noise level but if each is competing for the same spend they could keep the price up or trigger a device price war. Today they are like the early days of CDs too closely packed on price and we need someone to grab the initiative and go for volume based on price. If this doesn’t happen then the alternatives based on netbooks and smartphones will look increasingly more attractive. Also the longer they remain greyscale, the more attractive colour alternatives will look
Posted by Martyn Daniels at Monday, March 02, 2009

Yet another eBook reader for me to support? As a new author with a free eBook novel that I just published I am struggling to keep up with the different formats these readers utilize and the changing DRM strategies. Can't the industry get their act together and create some standards or do they all have to pretend to be the next Microsoft??