We get somewhat shell shocked with the constant dribble of new eReaders and wonder how many will survive a cold winter and are real contenders and how many are just after their 15 minutes in the spotlight. Last week iRex caused a minor stir with their new model. The attention was captured because it was 3G enabled and lost because of its price and lack of touch screen – there again iRex is used to being off target so nothing mew there. 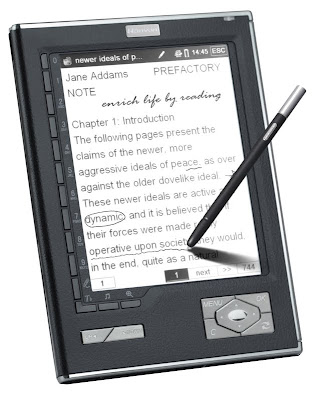 Today we spotted yet another pretender the Hexaglot N518 powered by Hexaglot, which is another 5” eInk ‘lookie likie’ which boosts as its unique selling point that you can also draw and even write on its display screen. Naturally the device has all the usual features and with their special sensor pen the user can write directly on the screen, adding comments, notifications and by handwriting text recognition converted into printed text and saving them. It also appears to be able to support Adobe’s ACS4 DRM. However at 279 euros its off taget.
Posted by Martyn Daniels at Sunday, September 27, 2009