The Great Book Bank Robbery: Pulling a Rabbit Out of the Hat 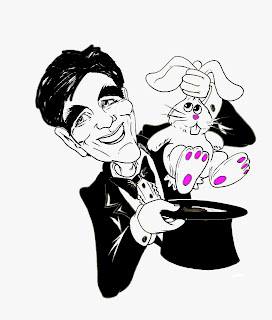 The Google Book Settlement is seriously flawed in a number of ways, but the parties who constructed it continue to fight. Some would say that they are 'ducking and diving' and rolling out their charm offensive. In a sign that they must now think that they are on the ropes, they have pulled out yet another rabbit out of the hat, this time changing the construct of the governing body of the board to have two non-US representatives on it. They are also undertaking to consult European publishers before cataloguing some European works in its digital library

It’s ironic that this has been conceded on the day that Europe meets to discuss the settlement, but it shows the level of opposition that Europe has finally and rightly mustered. It’s a pity that some publishing bodies didn’t stand up, but maybe their perceived vested interests lay elsewhere.

So once again we have a moving target, or what some may say is a patchwork quilt. What it clearly shows us is that there was a case with respect to foreign works. However appeasement is difficult as it isn’t just Europe and the US who publish, or are even the only signatories to the Berne convention and orphans are still being taken exclusively without recall.

The problem with this 'tome raid' is that it has something to offer everyone. There are parts we all would support, but the shame is that there are but a few who would support the whole settlement. That is the issue – it divides us, not unites us and is so complex that many don’t really understand it.

We hope still that the judge rejects it but await the next rabbit and concession to be pulled out if the hat.
Posted by Martyn Daniels at Monday, September 07, 2009

Daniel Clancy, who is the most visible spokesman for the settlement at Google, has a blog posting in which discusses his attendance at the European Commission's hearings in Brussels. This is his effort, as you put it, to pull a "rabbit out of the hat."

Clancy seems to be under the impression that he must "clear up misunderstanding" that seem to have engulfed the EC's leadership. Having read some of the filings that Europeans have been making, I don't think Europeans misunderstand Google's intentions. You can find their objections and those of others at The Public Interest:

Clancy's blog is moderated, so I thought I'd cross-post what I said to him here:

Daniel, you'd do well to read the copyright laws of a few nations or, even better, the Berne Convention, signed by 164 countries, including the U.S. An author's right to determine if and how his work is published is virtually absolute. No distinction in laws exists over whether a book is in-print or not, easily available or virtually impossible to obtain. If you don't understand that, you don't understand copyright law.

There's no misunderstanding between Europe and Google. Europe understands copyright law and what Google intends to do quite well. In contrast, Google's leadership either doesn't understand copyright law or it finds it convenient to pretend that the law is something other than what it is.

The German government's recently filed objection illustrates that when it notes: "The opt out mechanism [of the settlement] stands on its head the most fundamental and essential underlying principal of international copyright law and the laws of Germany -- exclusivity. Under both U.S. and German copyright law, no one may use an author's intellectual property without permission."

"“The poorest man may in his cottage bid defiance to all the force of the Crown. It may be frail—its roof may shake—the wind may blow through it—the storm may enter—the rain may enter—but the King of England cannot enter: all his forces dare not cross the threshold of that ruined tenement.”

In a similar fashion, the poorest writer in the most impoverished of country may bid defiance to Google and all its grand schemes. Google may not display his written labors without his express written permission. That's the law in 164 countries, including the United States.