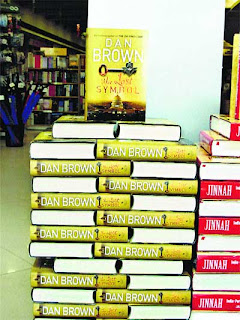 So as we touch down in Mumbai today we wonder about the storm that is Dan Brown that we have left behind in the UK. There is certainly no getting away from the Dan Brown effect. As we walked through Heathrow Terminal 5 last night the bookstores all had the book at the front with the appropriate discount sticker. We opened the newspaper to read about the supermarket versus Amazon, price wars. We even watched ‘Angels and Demons’ whilst enjoying BA’s in flight hospitality.

So what have we collectively learnt from the Rowling experience? How to ticket high and discount high so create what some would suggest is fast becoming a non value statement. How to build up a promotional campaign to support volume sales through the supermarkets and aggregators who may use the opportunity to create ‘loss leaders’ at the expense of the independents and the trade that support everyday life. How to generate book reading interest in non traditional readers, which is certainly worth noting, but only if it creates more purchases by this group.

When we see how ‘lost sheep’ such as EMI have handled the Beatles remixes and packaged these over the last month ,we see a stark difference in approach. The one thing that is certain at the end of the day is that the Beatles albums will retain their value for all and will not end up as pulp. It may be ok for the publisher to rub their hands and pat themselves on being able to mark up a title so that whatever happens they win, but it’s a trick you can only play once or at best a few times and is one that can screw the rest.

Finally, we wouldn’t be ourselves if we didn’t ask about the ebook. Yes the embargo worked and files were released with precision, but why was the price set against the hardback and on what some would suggest as different commercial terms? This was the opportunity to do something special for ebooks but a parallel release is hardly special. Why didn’t the ebook get released two days earlier with a coupon to get the hardback at a discount once released? Why not make the ebook truly different and collectable in its own way? Perhaps soon a publisher will be brave, but we will have to wait for the next mega title.
Posted by Martyn Daniels at Thursday, September 17, 2009