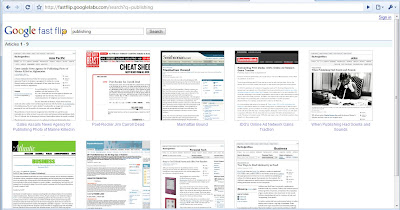 The newsprint sector is changing and facing many challenges which we have previously written about. One big issue is revenue and the changing business model that is being forced on it by the internet and current economic climate. In many ways they never really thought it would change and when it did they were ill prepared. Does it mean they will all go bust – no, but what will happen is that they will have to live in a market where others may well have a greater say in the destiny and revenues and maybe their interactions with their customers.

Google is not surprisingly one of the new major influences in the sector. Marissa Mayer, Google's vice-president of Search, told BBC News, "I don't believe we are part of the problem. I believe we are part of the solution." However, earlier this year, Robert Thomson of the Wall Street Journal called the search company and other aggregators such as Yahoo "parasites or tech tapeworms in the intestines of the internet" and only a few weeks ago Rupert Murdoch declared that it was time to start charging and by doing so wrestle back control.

In response, Google has launched ‘Fast Flip’ which is a news browser that allows the user to virtually "flip pages" of online content faster showing then pages of content as opposed to just titles and short snippets. The user can search on interests, have recommendations presented to them or just look at the most popular articles. Users who want to dig deeper into the story can click through to the publisher's website. Its different, but only time and usage will determine if it’s any better. It certainly is better than the current hotchpotch of news presented to us by iGoogle. Google wants to help you read news in the traditional way, just flipping the page and have the content served to you in seconds and compares Fast Flip to reading a newspaper or a magazine where the reader can turn the pages in a second.

Google has teamed up on Fast Flip with more than 30 providers such as the BBC, Cosmopolitan, Marie Claire, Elle, Popular Mechanics, Slate, Salon, the New York Times, the Washington Post and ProPublica. Fast Flip also serves up contextual adverts around the pages and this generates revenue which is shared with the content providers, which Google says is proof that it was keen to help the industry at a time when it was clearly struggling.

So as Google Fast Flips into a new look and feel in order to help save the industry it was interesting to read about its plans to charge for news content itself through a new system of micropayments within the next year. Google announced this in a document it sent to the Newspaper Association of America in response to a request for proposals the association sent to several technology companies including IBM, Microsoft, and Oracle. In its response document, Google stated that newspapers could also use Checkout to charge for subscriptions. It is now up individual newspapers to decide whether to pursue relationships with any of the companies that submitted proposals and that it would share revenue in a similar fashion to the iTunes App Store and its own Android Market, both of which take a 30% cut of revenue..

Interestingly, in a move similar to that taken in books, Google said that it believed that paid content could be a good complement to advertising. This would indicate that they recognise that advertising by itself is venerable and that potentially getting aligned to the content itself could reduce this risk.
Posted by Martyn Daniels at Thursday, September 17, 2009