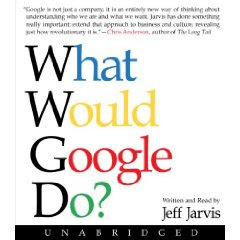 We were intrigued by several reports of a new format the ‘video book’. We didn’t stop to ask whether it was BluRay or DVD, but just wanted to know what it was. Could it replace MTV with BookTV? Was there an ‘Easter Egg’ buried in it. or was it all hype, hot air and a marketers dream to publicise the book?

HarperCollins has announced the ‘video book’ and the first to go is Jeff Jarvis’s. ‘What would Google Do?’ We thought it may be about the settlement but although some may say that would make a good mystery thriller, its not. Jarvis’s book is already out in hardback and also audio and now its coming out as a video book. So what is a video book and how does it relate to the book? Is it in author reading and does it have animation, graphics, actual film shots or special effects?

The answer is that it’s a 23 minute video of Jarvis speaking into a single camera with a white background. Jarvis talks apparently about the basic concepts in the book and that’s it!

So it’s a marketing promotion video or a meet the author type video? No according to HarperCollins its new its exciting and it’s a ‘video book’ and to top it they expect consumers to cough up $9.99 for it! Some would certainly question whether this is Wise.com?

HarperCollins has been noted for its digital experiments the past few years. However this isn’t so much as an experiment as a basic promotional video which you have to buy and then hopefully you buy the audio or the book. Some may say that it’s like asking consumers to pay to watch a film trailer or pay to read a book review, or pay for video clip not a video book. Someone is obviously thinking it’s a ‘great idea’. HarperCollins expect to produce a further 6 six ‘video book’ titles in house, which will be available for download on iPods and iPhones. So they are even asking consumers to pay for home movies!

Authors are reported to be receiving around 25% percent of the sales, but if as some would think, these end up being given away or used as bargain promotions, then 25% of nothing, could amount to not a lot.

If the ‘book video’ succeeds it may tell us much about the new video culture we live in and the decline of traditional reading for the 23 minute sound bite.

We normally applaud innovation and experimentation, but question where this is going and also the potential impact if all author videos and podcasts went the same way?
Posted by Martyn Daniels at Tuesday, February 03, 2009

The 'video book' is something I've been trying to figure out how to do for a while, now. My best idea for it, without moving into movie adaptation territory, would be me reading the book in front of a video camera. Audio book + seeing me read, preferably animatedly, with hand gestures, facial expressions and the like. Since audiobooks are so long and this version of the videobook would be at least as long, the only reasonable dissemination methods would be as a video podcast, in chunks (like the podiobooks I'm already doing), and then as a DVD box set? Not sure there's a market for such a thing, but maybe having dozens of YouTube videos floating around of me reading chapters from my books would be a better marketing tool than Harper's idea. Plus, I could do a sort of running "author's commentary" of the book by putting it in subtitles - an audio commentary of an audiobook just doesn't work, but video allows it. That sort of multi-pronged experience (plus comments on the video from users, plus video responses, et cetera) is the only way I've been able to envision the 'videobook' becoming a practical/useful/interesting offering.