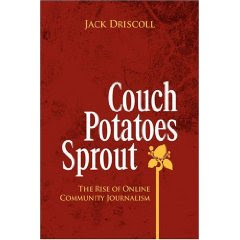 In 1721 when James Franklin started his weekly newspaper, he invited readers to contribute. One of those readers was his typesetter and brother Benjamin, who started writing essays under the name of "Silence Dogood". In the early days of the printing press contributions and views from a wide range of people were published as flyers, pamphlets, then as periodicals and eventually they became newspapers. Over time citizens contributions become relegated to Letters to the Editor. The people became more receptacles for news and information and not generators of it.

Ex Boston Globe and MIT Media Lab, Jack Driscoll believes that computer have changed that one way traffic and has published a book, ‘Couch Potatoes Sprout: The Rise of Online Community Journalism’. He starts with the line, ‘now anyone with a computer is a newspaper.’ So what is a "newspaper" and what are the differences between individuals or communities publishing the news and the work of professional journalists.

Today we have bloggers who in some cases are voicing their opinions, in others are being aggregators or teachers, and in others champions of causes. However, Driscoll believes that community groups are often frustrated with their community media. He suggests that community groups will tend to do more original reporting than lone bloggers and will tap the potential of community activity. We now live in a world where everyone is a potential journalist, photographer, and cameraman. The enablers for this collaborative work, the computer and network are here today. They now offer local groups the opportunity to add that extra value to traditional media and fill the community gap.

So does the democratisation of news, reporting and opinion become a collaborative exercise and if it did, what does it mean for newsprint as we know it today? Can community journalism, blogging and professional journalism co-exist?
Posted by Martyn Daniels at Tuesday, February 03, 2009