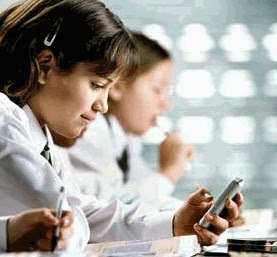 Remember when slide rules were first introduced into the classroom and the debate quickly ensued as to whether that was the right way to teach? Then they were banned for exams and the story moved onto calculators and other gadgets and even laptops.
The NYT today reports on Mobile Learning 09, in Washington. The CTIA, a wireless industry trade group, plans to present research, which was paid for by chip maker Qualcomm that smart phones can make students smarter.

Some would argue the debate is a bit cynical product placement. On one hand Shawn Gross, director of Digital Millennial Consulting, which received a $1 million grant from Qualcomm to conduct the research says “This is a device kids have, it’s a device they are familiar with and want to take advantage of.” On the other hand they project that wireless companies could sell 10 million to 15 million phones as a result of this effort in the next few years.

The question of what tools students use is only just reigniting. However the technology companies face the dilemma of funding their own outcomes, or letting their competitors win.

All schools have already spent large amounts on PCs, WiFi and technology. The market is diverse and buying and policy is in the hands of many so the question is not whether technology will be deployed but how and what? We would expect to see the Kindle 2, Sony, Plastic Logic and all being declared good and a must have for all students. In the background we also have the LCMS (Learning Content Management Systems and lots of vested interests and potential revenue.