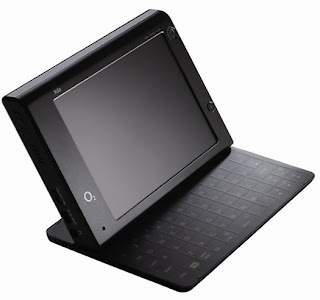 However after the wow come the reality check. It’s expensive at nearly £500 and why wouldn’t someone buy a proper netbook? Some may say that this is convergence too far and time to rethink what the consumer’s want and what price they will pay.

Speculation is rife over HTC's next Android mobile with reports that the handheld has no physical keyboard, unlike the current T-Mobile G1. The phone features the same design cues and trackball raises the posibility that the G2 will run on a new version of Android OS that will support a onscreen virtual keyboard.

With manufacturers such as Motorola, Sony-Ericsson, Toshiba and Asus all expected to launch Android OS devices this year and are set to chase HTC, which manufactured the first Google phone.
Posted by Martyn Daniels at Thursday, January 15, 2009