So what do; the Beatles and The Ed Sullivan Show, American combat troops and Vietnam, Lithuanian democracy, Carole King and Mia Farrow and Amazon, all have in common?

Amazon has announced a press conference at New York's Morgan Library & Museum, scheduled for Monday, February 9th and hosted by Jeff Bezos himself. As you can see the day is not one of the biggest event days in history, but are Amazon planning on changing all that? The Internet is now rife with speculation that the book giant is planning to launch its long overdue Kindle 2 and a library would appear to be the perfect venue.

The speculation of what it would look like has started. Will it have a bigger screen, more feminine rounded corners, be thinner, rounded buttons, smaller side buttons and come in designer colour packages? Will it have faster screen loading, using the Broadsheet chip used in the Sony 700? Some may say that these are fairy safe guesses, but what may be the surprise, or has it again taken so long to get to this stage that there is very little surprise?

Whatever lands on the street on the 9th it is clear is that Amazon has some catching up to do in the market if it is to regain the initiative it created with the K1. Irrespective of how many of the K1 boxes were shifted, the spotlight has clearly moved from the eink grayscale readers to the full colour and ubiquitous iPhone and mobile platform. It will take more than a quick dust down, lick of paint, rounding of the edges and an Oprah stardust endorsement to get the K2 back to pole position. Sony has consistently plugged away and with its epub credentials and its educational moves and its availability and is starting to make the eink running. We have consistently stated that we believe that the end game is between the shrinking notebook/lapotop and the mobile smartphone, between download and online, between restrictive DRM and DRM free and more likely OLED than eink . It is unlikely that Mr Bezos is going to move any of these goalposts next month.

We now wait, speculate and listen to the noise, but just in case you are curious what some believe will pop out of the box next month here is a ‘leaked’ photograph from the gadget site Boy Genuis Report. 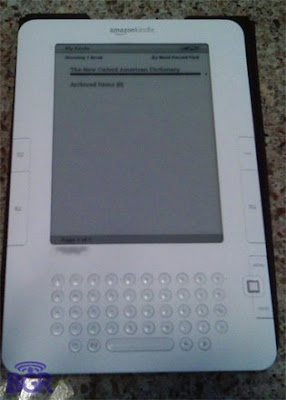