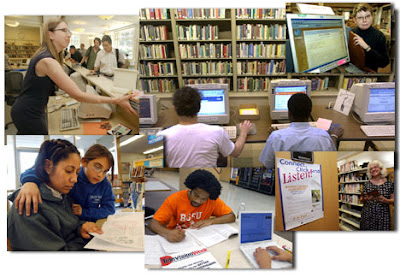 We are pleased that the issue of free to lend from a public library, versus a fee to buy from a reseller has been brought out into the open today. This problem is one we have written about all year. The debate is long overdue but today’s Bookseller story ‘PA sets out restrictions on library e-book lending’ was quickly countered by a further one titled ‘Librarians worried by publisher e-book restrictions’ The stories cover the latest position adopted by the PA ( UK Publishers Association) at the CILIP Public Library Authorities conference in Leeds.

Stephen Page, CEO Faber and Faber, announced the new guidelines, telling delegates that "all the major trade publishers have agreed to work with aggregators to make it possible for libraries to offer e-book lending". However, users would only be able download an ebook from within the library's physical premises and via a computer terminal.

The plan would extend the fee paid by a library to buy a book and give them the right to loan one digital copy, to one individual at any given time.

We believe bringing the issue to the table is both timely and correct, but question whether the decision was forged in consultation with the libraries, or came down the mountain on tablets of stone. The problem is far from solved by the PA’s plan as it tries to shoe horn tomorrow’s digital world into yesterday’s physical practices.

Were the libraries consulted?

We fully agree that it doesn’t make sense to expose the reseller to a free offer from the libraries that they can’t compete with. However, it is equally ludicrous to tie the libraries hands behind the backs and pretend that ebooks are no different to pbooks and place restrictions on them. We now find that, one day after the big spending cuts were announced that the PA has clearly got their own way of cutting back on libraries. Some may feel that this move makes a mockery of all the support the industry has recently given libraries.

What is needed is a bit of common sense and above all communication between all parties.

This move will almost kill off the public library as a digital lender and further hasten its demise within these austere times. It is impossible to understand the logic of why downloads have to be via a library terminal. Hello, hasn’t anyone at the PA worked out what WiFi and 3G is yet? This tethering of the ebook download to the physical library building and terminal makes no sense at all. Even the much derided Margret Hodge offered more sense than this.

The answer is not easy but is not born out of a one sided perspective of life. Tying individuals to local public libraries is not an issue, it is done in many countries and systems today. Access and authorisation can be governed by the library system so that registration is maintained and auditable. It doesn’t matter where anyone is, it only matters that they are authorised. The only potential issue is with respect to inter library loans which may have to be restricted for ebooks, or incur a further fee payable to the rights owner.

So what about the thorny issue of ‘free.’

We are moving towards an online mobile and 'rental on demand' world. So why not allow libraries to ‘rent out’ as opposed to ‘loan’ to their members and charge a rental fee for any download. We have operated such a system in Denmark for libraries and similar systems are being proposed in other countries. Does anyone look outside of the UK and other than the US? The download can be easily protected, restricted to a specific time window and copying prohibited. This would allow libraries to rent out anything to an authorised member, at anytime and they simply pay a fee for the service and availability over the internet. Title rents can be collated and even contribute to improving the PLR deal to the author.

We realise that this a significant shift, which basically says pbooks are free in libraries and are restricted by the physical need for members to collect and return them, whilst digital ebooks offer added value and can be virtually rented, but for a fee. The beauty of the model is that is could also be offered to anyone including resellers, societies, institutions etc . Libraries then can use their communities and collective power to grow their service, whilst resellers and others can compete with online subscription and rental models as well as offering outright purchase of downloads.

This may appear far fetched to many who believe that libraries must remain free. There may also be other issues that need to be addressed. However, it could actually enable libraries to coexist and grow membership within a new wider commercial digital environment.

The question now is, whether all parties have the will to co-operate in order to find a solution that works for all.
Posted by Martyn Daniels at Thursday, October 21, 2010

The issue of remote downloads in public libraries has reached this impasse because of the trend towards universal membership. Anyone can join the library in any authority regardless of where they live. Almost all e-resources in libraries (e-books or e-reference material) are priced per head of population. So it is not surprising that publishers object to someone in Dorset borrowing an e-book, free, from Manchester libraries, when Manchester have been charged a subsription based on the population of Manchester.

The compromise would be either to restrict membership to people living or working within the authority, or introduce 2 tiers of membership, one for locals who could use the e-resources remotely, and one for people outside the authority, who would have to come into a library to access them. I can't see the latter being a problem for most LMS's to handle.

sounds a responsible solution to me but what about inter library loans. In Denmark we have eBog which is restricted to local registrations of members.

All these issues can be workaround with dialogue and common sense.

Thanks for the insight

Speaking as an author with books frequently borrowed from libraries I think this is an excellent idea, Martyn. People are willing to pay a small fee to borrow CDs or DVDs, why not ebooks? And it might well boost PLR.