In April 2007 Steve Ballmer, Microsoft's chief executive, said of the the iPhone that it was "the most expensive phone in the world" and that it "doesn't appeal to business customers". He said that it had "no chance" of gaining significant market share. Although Microsoft still dominates office and consumer PC markets it has surrendered much in the mobile marketplace in the past three years. History proved Ballmer wrong and whilst Microsoft now has single digit market share, Apple now have significant market share and being potentially overtaken by Google and their Android platform.

Ballmer and Microsoft have now unveiled a range of phones using their new Windows Phone 7 system. Its new interface is aimed at integrating phonebooks, social networks and other information around "hubs" . Ballmer claimed it would give users, ‘the ability to do everything on their phone but easier and faster. Less stop and stare, more glance and glare.’

It now faces a different market and business models where the likes of Nokia, RIM and Apple, are all developing both the software and the hardware,of which the hardware is the most profitable,and with Google’s Android platform, driving searches and selling mobile ads. Microsoft is now going to charge a license fee to manufactures and wanting the search and ad revenues. 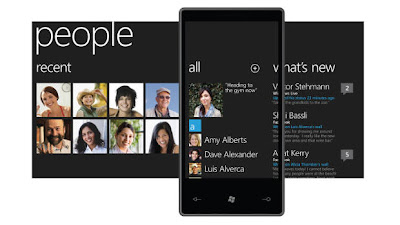 Microsoft has also adopted a different approach to others by creating Windows Phone 7 for small-screen devices such as smartphones and continuing to adapt its new PC operating system, Windows 7, for tablets. This approach is at odds to Apple's, whose iPad uses the same iOS core as the iPhone, Android, which has already ported to tablets such as the Samsung Galaxy and even RIM, whose new tablet will use a new operating system that is then expected to run its BlackBerry phones in the future.

One side will argue that the tablet demands a computer orientated operating system, others that they miss the point of the word mobile. Whatever the position adopted it is hard to see everyone changing to adopt the Microsoft approach, so it may be a valid position, but no necessarily the winning one.

Six handsets will be available to preorder in the UK next week with Samsung, HTC, LG and Dell all being hardware launch partners for the Windows Phone 7 and Vodafone, O2, T-Mobile and Orange all committed to carrying them. 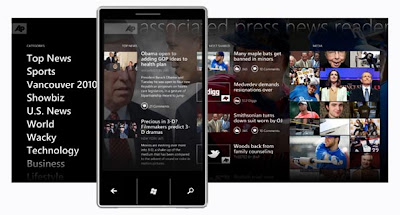 Microsoft has kept a tight rein on the user presentation and set up under Windows Phone 7. Applications are grouped under six Tiles and within a tile the user can scroll up and down through a list of options or entries. The Games Hub links in with the Xbox Live service. The Zune, Office and Bing Search Hubs are aligned to their existing bigger brothers. Automatic over-the-air syncing with a home, or office wi-fi setup, will allow the phone to synchronise content.

So what about that "app store". Today, Microsoft are forcing those who worked on their previous generation of Windows Mobile phones to rewrite them, but this may be inevitable given the scope of change? The move however is likely to please Silverlight and .Net developers, but may not please others who use different tools. They are still likely to see a significant number of apps being developed and the questions then become how many times does a developer have to cut code to support all the various platforms and will the consumers take to them?

Once it would be hard not to see Microsoft winning and being successful, but today it is often the reverse and their once dominant position is continually being eroded and their judgement found wanting. Will Windows Phone 7 succeed, or will the premise that 'phones are different' be its downfall?
Posted by Martyn Daniels at Tuesday, October 12, 2010