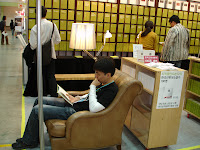 In this second letter from Seoul we look at its booktrade.

Korea is at the heart of digital manufacturing technology is behind the digital curve with respect to the booktrade. It has a strong literary culture, have a highly educated population and love books.

The Korean market is dominated by two large physical resellers and an Internet retailer and although there is a strong independent reselling community, just as in the West, they struggle. We had an open two hour discussion with a group of representatives from the independent booksellers. Their concerns were not unlike those of their western counterparts and we suggested many ways on how they can move forward in this new digital age. However as always there are differences.

The largest difference was on pricing. Like many other countries, Korea operate a fixed price book market. However, this only applies to books traded within stores not those sold over the Internet. ‘Yes24’ Their large internet book reseller, ‘Yes24’, can effectively discount the same physical books to that ‘fixed’ on their physical counterparts. This is madness and effectively ties the bookstores’ hands behind their backs and asks them to compete on a clearly uneven playing field.

As in the West the large stores can buy on better terms and also demand the usual retail extras for ‘product placements’ and ‘shared marketing contribution’. This acts as a double whammy on the independents who do not have the same buying clout.
As a result the independents are being squeezed out even before digital books make their mark on the market.

We suggested collaborative opportunities, broadening the range past the sale or return front list, community building, specialisation, email marketing, digital affiliate ventures with the larger outfits and many of the incentives tried in the West. What was clear is that they have to start thinking and acting as one. 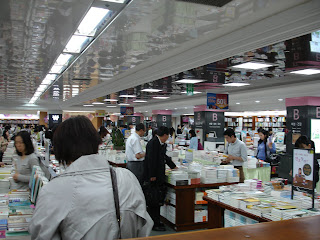 The significant eye opening sight was to visit the second largest reseller YP Books in Seoul. It was large with a significant range of Korean titles plus an English language section that was probably larger than most independents. Books were clearly stacked high on tables, shelves bulged books, signage and navigation was excellent and in merchandising alone it could teach many in the West. However the sight that took us all back was the number of people that were there on a Friday afternoon. They were also nearly all under 30. They were browsing, buying and reading. They were even sat on the entrance steps, on the floor between the aisles and were reading books! 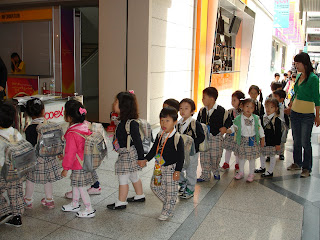 The Seoul International Book Fair was attended by 596 publishers from 21 countries and clearly demonstrated the width and depth of the Korean market. It was held in the COEX centre and occupied a large hall full of the usual booths full of books and interestingly didn’t have those often ostentatious ones that we find in other fairs.

As a side issue Korea’s birth rate is dropping dramatically as women elect careers over babies. It is a major social trend but it means the children of today who clearly love books will love books tomorrow. The sight of infant school children being taken into to the Book Fair on an outing on the Fair’s opening day was heartening. The children were all smiling and enthusiastic and perhaps this is something that others could well learn from!

Finally we were taken the city outskirts to Book City. Its somewhat ironic that the government choose to place cultural Book City and the nearby artist community project right on the border with the North. From the rooftops you can look across over the barbed wires and lookout boxes across the river and into the north.

Book City is a government incentive to consolidate publishers, printers and distribution in one location. It houses some 100 separate publishing units and although the Supply Chain benefits are clear, publishers can find themselves split between a Seoul office and Book City. Which departments work in Seoul and which commute to Book City is an interesting question.
Posted by Martyn Daniels at Sunday, May 16, 2010