Our third report from Korea looks at Book Technology.

Technology often follows a path which starts with creation moves into a prototype and development then gets adapted to solve a specific needs, gets refined with more input and then if its appropriate gets adopted by a wider audience. Often there is a disjoin between those who create and those who adopt and its this business adaption where many fail or succeed. So it was very interesting to walk around the Seoul International Book Fair and see technology being adapted. 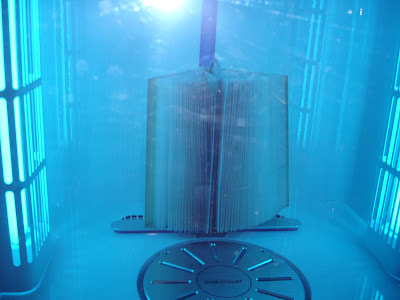 Well you couldn’t make the name up could you?

The shower immerses the book in a cubicle and literarily blows its cobwebs away, removing the dust and grim accumulated from sitting on a shelve neglected for too long.

At first we watched transfixed like someone watching a spin dryer for the first time and asking ourselves why? The device was adapted to be used in libraries to sterilise books removing mould, bacteria, viruses such as H1N1 and ‘infectious worms that threaten our children in the daily life’. Like that old Demstos slogan ‘It removes 99% of all household germs’ and all in 1 to 2 minutes!

However apart from the obvious application to sterilise books by ultraviolet rays and freshen them it also has an electrostatic film filter that removes dust. This was of interest and we immediately thought about our scanning programme and whether this could improve the reliability of the scan by removing particles from the process. Interestingly this was something the manufacturers had not thought about and again is about adaption within the development cycle.

The Shower comes from IVS Innovative Visionary Systems and costs about $5K. 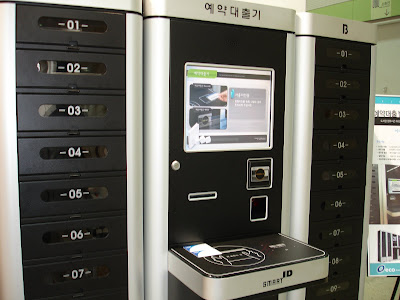 We went to see another POD (print on demand) offer and were drawn by the machine and process next to it the ‘ECO Automated Library’.

Imagine you are at home on the computer logged onto the local library, you select a book and ask for it to be available at your local station for your commute to work, alternatively it’s late at night and you want to collect a book but the library is shut. You may even log onto the library via a mobile and request a book whilst mobile. You may just want to return the book to the shut library and want a drop off point. From the other side you may be a library just wanting to automate some library operations to free staff to face readers.

The system has a number of components which are for an in-library service and self checkout. It is based on an integrated inventory management approach and security control using RFID and barcodes. However the one that caught the eye was the ‘Automatic Material Dispenser’ which offered something different and we thought was literally outside the library box.

Anyone who has been to Japan is familiar with the dispensers that are on the street. This is another one, but one that is aimed or adapted for books and not targeted for the street, but stations, community locations or even outside the library itself.

The principle is that a user selects and is allocated a specific collection box and maybe even time window. They go to the dispenser identify themselves open the appropriate box and take the book. The box is empty and can be refilled and reused just like a left luggage box in a station. Returns can also be accommodated by a separate machine.

Ok we have all seen book dispensers sitting idle at airports filled with a selection of the latest blockbusters. However, imagine you were going on holiday and could pick up your book at the airport and return it when you come back. Imagine a large office, a mall, a bus station even out side the library itself. All that is required is a delivery the book to the appropriate dispenser slot.

The basic unit from ECO costs some $25K US and comprises of a control section with two racks of 12 lockers. This can be enhanced to accommodate 8 racks providing 96 lockers at a cost of $5K per two additional racks making a total of $40K. There is the obvious cost of floor space and distribution, but it has many potential uses. ECO have over 500 libraries in Japan and Korea using the library automation system and have an impressive 75% market share in Korea.

Why not use by a bookstore that can take orders over the net and uses the dispenser to offer 24 store service or additional local distribution? Why not use it for the safe unattended collection of other documents, uses within large or sensitive organisations for confidential distribution, or even have it fed by a POD service?

We hope to have a video clip from Korean TV of Annie and the machine later this week.

It is basically a secure locker system that controls the distribution of stuff to an authorised person by self selection or push distribution. The user interface to the system is open to any mobile or PC device and the locker is just a personalised collection and return point. As we said at the beginning technology is created, built, refined, adapted refined and adopted. Some never make it past the drawing board but we fell this one has the potential.
Posted by Martyn Daniels at Monday, May 17, 2010

I couldn`t find IVS`s webpage,can u tell me the right website plz.

hello dear writer, how can i find valid article about the book shower? i really need it for my assignment. im doing an assignment about new technologies used in library nowadays. seems hard to find the article :(

the best route is to contact the manufacturers. The Shower comes from IVS Innovative Visionary Systems and costs about $5K.