What is an App and what is an eBook? 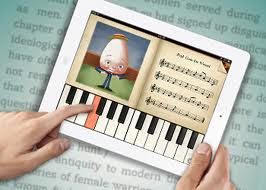 What do apps and ebooks have in common and what do they have that makes them different? When is a book an app and an app a book?

At first the answer appears simple and straightforward. An app is a program that you download onto your smartphone or tablet that is interactive, informative and is cheap. Many apps soon start to become essential real time essential information feeds to navigate, inform and entertain us they are like real time applications. An app is a self contained unit it may go elswher to get its content and information but everything is rendered within the app. An ebook is a digital book and for the vast majority are no different to the physical book and even contain the same black pages. The ebook is a lower level container of content that can hold multi media but goes elsewhere to render it on a digital device.

They are very similar, or can be very slimilair and may be viewed as different digital containers.

As we wrote earlier this month the rights issues are also very similar and can also create new challenges.

Enter Apple who not only introduced the app but also would like to own the term exclusively. We have seen them build their walled app garden, first demanding 30% on all revenues , then dictating the development tools to be accepted, then launching their Apple only authoring tool, and now find them attempting to redefining the ebook.

Apple are trying to define the difference between an app and an ebook. They have informed some creators that their enhanced ebooks are in fact apps because they contain moving animation and images and have been enhanced!

If this is a misunderstanding from Apple then we move on. However, if they have really started to separate ebooks, enhanced ebooks and apps then we could be in for some ambiguous times. We have to also be aware of the price point differences between apps and ebooks and therefore some would suggest that enhanced ebooks should cost more than ebooks and certainly more than apps.

It’s somewhat ironic that a company who has such a long and loyal media and creative following is apparently trying to now convert them into serfdom and shackle them to their iWare. Apps and ebooks have to be platform agnostic and media enhancement does not make an ebook an app.

Hi Martyn. I have been musing about the rainbow of possibilities that now exists between physical books at one end of the spectrum and video games at the other. These two previously unconnected extremes have started to converge in a very haphazard way following the arrival of tablet technology. Amazon's "Kindle" has opted for a conservative growth strategy, targeting existing book buyers and moving them smoothly from paper to digital books, both bought at the same online store. Simples!! However, I think Apple's i-pad is too much, too soon for real book enthusiasts. We have an i-pad 2 and my experience of buying electronic books for our kids has been very disappointing (with only a few worthy exceptions). The shiny (dare I say "brave") new book world inside the Apple store is in a bit of a mess. They are following a rapacious, first to market strategy and pushing second and third rate e-books(?) out at customers eager to get the full benefit of their new i-pad. There are Guttenberg Project e-books available for free, but these aren't very entertaining for children. Then they have classics like Roald Dahl's books, but they're just digital copies of the books and have no colour or animation, which is a bit sad, given the potential these books have for capturing a child's imagination. I hope the publisher will do something about that because they're missing out on a lot of profit. In addition you will find applications masquerading as books which are a mix between a comic and an animated cartoon and do not encourage reading at al. They have so much animation that children are permanently distracted, as if they were watching TV or playing a video game. I need a book that looks like a book, has some light relief and some ingenuity in the way it uses the technology underneath to enhance the reading experience, instead of blowing the reader's attention into tiny pieces. How will children learn to pay attention and withold complex arguments if they've only been encourgaed to retain an idea for 5 seconds? I would really like to develop e-books for children, based on well-known titles because I think the products that are getting pushed at us by Apple have completely missed the point. Hope you liked my ramble and if you know anyone wanting a collaborator on a children's digital book project, please let me know. MARTIN

Anonymous said...
This comment has been removed by a blog administrator.
4:52 pm