'We' Whatever and Archos 7 Tablets

We commented the other week about the poor branding of the German iPad rival Neofonie’s ‘WePad’ and it has now rebranded itself "WeTab". They say it was to "clearly differentiate [their] products within the international market for tablet computers". But they still failed to change the obvious branding gaff.

However they are not alone on the tablet space with the French now entering the market with the Archos 7 which offers full web browsing, high definition video, a USB port and all at an amazingly price of €149. 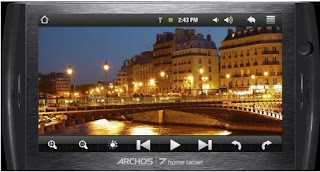 The 7" Archos touchscreen (800x480) is smaller than the iPad and is 12mm. So in some respects it fits half way between the phone and the tablet and importantly is portable enough to slip in your jacket pocket.

The other plus is that it is Android-powered tablet comes in 2GB and 8GB versions, is WiFi, also enabled for social-networking applications, email, photo browsing, and has a MP3 and movie player. It also has that USB 2.0 port for connecting you to other devices.

The minus points are that it doesn’t have official access to the Android Market Place app store but can be customized with around 1000 compatible Android applications from Archos' own AppsLib Market. It also only runs on Android version 1.5 with no plans of a future software upgrade. The final negative is that it doesn’t support Flash.
Posted by Martyn Daniels at Monday, May 10, 2010