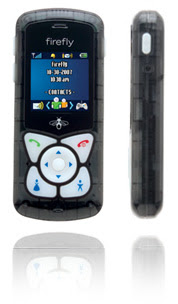 Would you want to give a four year old a mobile phone? More than half of children in the UK aged between five and nine now own a mobile phone.

A mobile phone targeted at children is to be launched in the UK from Firefly. The glowPhone has only five buttons, one is a direct line to the child's mother, another to their father, another accesses a phonebook that can hold 20 numbers - all individually entered by the parents. The phone can also be set up to block any incoming calls from unrecognised numbers.

No internet, camera, or SMS just a simple phone.

Will it be allowed into the UK? The glowPhone, is already on sale in the US and Ireland, is expected to cost £85 without a SIM when it is released in the UK. Over 7,000 of the phones have already been sold by O2 in Ireland, where it is available on the O2 network.

We don’t think that publishers will be able to target this market but we bet the calls could soon mount up especially to the parents when they are out of site!
Posted by Martyn Daniels at Wednesday, June 24, 2009