Publishing News in The 19th Century 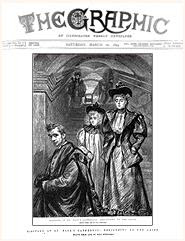 The rich and interesting 19th century of British history can be now read online via the newspapers of the day. Some 49 national and local newspapers have digitised by the British Library with funding by the Joint Information Systems Committee (JISC) and technology from Cengage Gale.

Over 2 million pages, from newspapers such as; The Birmingham Daily Post, The Aberdeen Journal, The Daily News, The Examiner, The Northern Echo and many more. They cover the rich tapestry of events such as; The Napoleonic Wars, The Great Exhibition of 1851, The Whitechapel Murders, Urban Growth and Social Reform, the Crimean War, the abolition of slavery, the rise of the British Empire and much more. In 1800 around 40% of males and 60% of females in England and Wales were illiterate, in contrast by 1900 illiteracy for both sexes had dropped to around 3%. This was the age of mass education, reading and the papers fed the new skill.

On 5 January 1900 the Manchester Weekly Times advertised itself: 'All who enjoy breezy, healthy fiction should make a point of reading these deeply-interesting and up-to-date serials.' Serious news was central to the role of the press, but also the wit, gossip, and articles on entertainment and lifestyle were essential to their popular adoption, appeal and commercial success.

Access to everything bar The Graphic and The Penny Illustrated Paper cost £6.99 for a 24-hour pass with up to 100 downloads or £9.99 for a seven-day pass with up to 200. This contrasts with individual titles who have digitised their own back catalogues such as The Times, The Guardian and The Economist and cost in the case of the Economist Historical Archive, some £1,500 a year.

Is the service is purely one of archive, for the researchers that will use it or a public sevice to be enjoyed by all? It would be great if this wealth of public work were opened up free for all to delve into enjoy as a national treasure. Constructed as is we feel it will feed researchers who have specific topics to investigate, but will not encourage the public to merely dip in and enjoy.
Posted by Martyn Daniels at Thursday, June 18, 2009

This is cool stuff. Do you have a direct link?

I agree it would be better if it were free. Everything in those papers should be in the public domain by now.

I agree. It does seem odd that access to periodicals in the public domain costs far more than a subscription to the current news at prestigious publications.

Competition is probably why. At present, these archives have no competition and are charging what the market (mostly large libraries) will groan and bear. That's no doubt why libraries are so suspicious of the monopoly Google would get if the settlement is approved. And if libraries are forced to pay out big for Google's scheme, they'll have less money for new books as they come out.