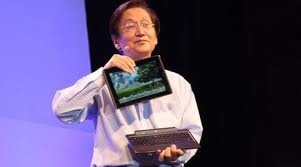 The first table we saw that impressed was a HP laptop whose screen could be swivelled and the reason it was impressive was it was then used to project slides to support a conference presentation and the presenter proceeded to drawn onto the tablet to highlight and project drawn images etc. However, the price was just too much and it was obvious that the device had a clear weak spot in the swivel point, but it did impress.

Now Asus have announced the first shipments of their Eee Pad Transformer. It’s called the Eee Pad Transformer because can use an optional Qwerty keyboard docking station with unique Android function keys. The scratch-resistant 10.1” Gorilla Glass touchscreen can be viewed at angles up to 178 degrees and it is claimed to provide 50% better rendition.

It follows the usual Android tablet spec in having an Nvidia Tegra 2 dual-core processor, coming with Google's Android 3.0 ‘Honeycomb’ operating system, aka "Honeycomb" and is preloaded with Polaris Office 3.0, which supports the most PC file formats on PCs, such as MS Office, XLS, XLSX, PowerPoint, Adobe PDF, and image files.

The battery life on one charge is some 9.5 hours which increase to 16 hours when docked. As with other mobile tablets it has a 5MP rear camera that can record HD video and a 1.2MP front-facing camera for videoconferencing and can support both WiFi and 3G. As with laptops it has a mini-HDMI port, a 3.5mm audio jack, two USB ports, a built-in SD card reader and also SRS Sound technology.

So is it a laptop or a tablet, a mobile device or a PC? Will the price of $500 to $700 be low enough to tempt those looking for something extra?

As Android Tablets vie for position it great to see them all trying to be different. We think that the docking station isn’t enough and we would like to see more voice recognition and intuitive interfaces than a keyboard.
Posted by Martyn Daniels at Monday, March 28, 2011

This new Pad Transformer from Asus is looks very thin, light weight, detachable from keyboard 1.2 mp camera with HD recording, and a camera for video conferencing these features are makes it as nice look.