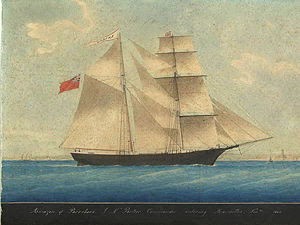 The Mary Celeste was a brigantine merchant ship that was found on 4 December 1872 in the Atlantic Ocean unmanned and apparently abandoned, in fine weather and in seaworthy condition and still under sail heading towards the Strait of Gibraltar. She had over six months' worth of food and water on board, her cargo was virtually untouched and the personal belongings and valuables of passengers and crew were still in place, including valuables. The greatest maritime mystery of all time.

We ask what has happened to the Google Book Settlement (GBS) and whether this will become a book industry mystery like the Mary Celeste?

The Google Book Settlement unleashed great emotion within the book trade and book community. It divided many a house and was widely criticised or rejected in the international community. it was rejected by the US Justice Department who some say had to stand up and enlighten some sleeping passengers. We opposed it from day one and even after its somewhat botched rewrite still failed to address the orphan issue.

It is somewhat surprising therefore that Judge Chin has still to rule on the last Google Book Settlement Fairness Hearing. People put in both cost and effort and although there were strong points of view expressed with 21 speaking against the revision and 5 speaking for it, one year on, we still await a ruling.

Judge Chin announced upfront that he would not make a ruling on the day but sometime soon. We haven't seen either a date or a time frame and still wait whilst the world changes, orphans remain are exposed and copyright remains wedded to the past.

Some would suggest that there never will be a ruling and the settlement is dead.

Others would suggest that the settlement is still alive and with time the opposition will just forget and the ruling may be slipped through on a bad news day.

Google have continued to move forward and although holding fire on the orphans the rest is business as usual. The rights registry sits gathering dust with a designated leader but little else. The payments that authors may have expected for not opting out, are suspended or forgotten?

Does anyone know what is happening?
Posted by Martyn Daniels at Thursday, February 24, 2011