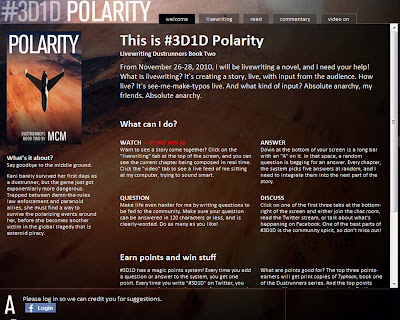 We have seen innovation and multi media writing from the likes of Kate Pullinger and her Animate Alice living story and Anthony Zuiker, the creator of the CSI: Crime Scene Investigation U.S. television series, multi media ‘digi-novel,‘Level 26: Dark Origins’. We now see another ground breaking approach from Canadian writer Michael C. Milligan. He is literally writing a novel live on the Internet and doing it in 3 days starting November 26th.

What is different about Milligan’s novel is his that he is not doing it by himself but with an army of unpaid followers, who through tools such as; Twitter , gTalk, meebo, Wordpress, are actively contributing to the development of the work. He is even live on video as he writes. For every chapter, the system picks five answers at random, which he needs to integrate into the next part of the story. He openly encourages questions and dialogue and even has a points reward system for contributions which will reward the top three contributors with print copies of the first book in the series ‘Tyhpoon’ and the top contributor, a name character in his next livewritten novel. 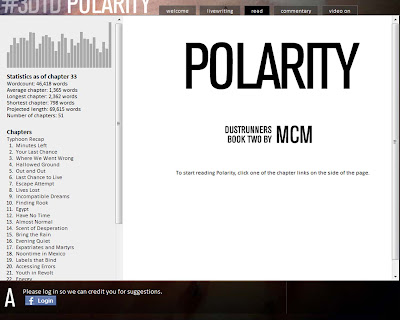 The site clearly has been very well thought out and neatly combines all the various elements in a logical and easy to follow manner. It combines advertising, user registration, multi media, merchandising and a living work. There is no other such combination we know of today that has put the author at the centre of his audience in such an accessible way whilst they create their work. 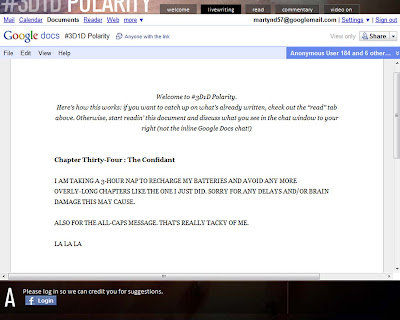 Could this approach be used to galvanise other types of writing such and special interest, live research, or replace the blog as we know it today? It certainly integrates tools into one holistic place which shows off their collective strengths in ways we often miss when used individually. 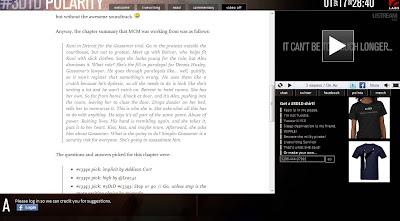 If we were Google, Amazon, Lulu, we would snap this up in a heartbeat and enlist the team that put this together to offer others a new way of creating writing, reading and social communities. It would not work for many writers, it may only work for fiction, it may not work long run, but the concept and Milligan’s execution has to be applauded as a breath of fresh air.

The best part about this exercise is that it engages and joins the author and the reader in a way that only could be achieved in the 21st century.
Posted by Martyn Daniels at Sunday, November 28, 2010

I love the idea of this approach being used to galvanise other types of writing such as special interest - the approach would certainly play a valuable, low-cost role in aggregating specialist content from experts to assist the research and development of new titles.

Well designed and structured topic pages could be edited and enhanced by the contributors like in a structured wiki approach to create a very robust and detailed collection of facts, photos, images and narrative around interlinked topics.

I see special interest publishers moving toward this approach as they reinvent the way they do their core metier.

Wonderful to read about to seen innovation and multi media writing from the likes of Kate Pullinger,the picture is good too.