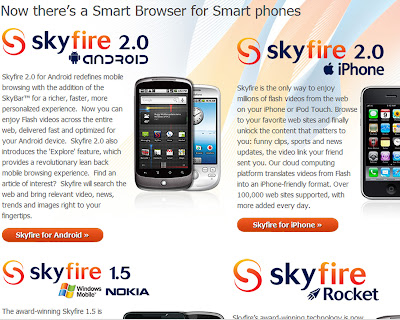 Sometime someone comes along and demonstrates where the consumer demand really is and show those who ignore it, or think they know better, they have got it wrong. We all know the video platforms of today are dominated by Adobe’s Flash and that some believe that HTML5 is the real answer other that Silverlight will prevail. The real fight started when Steve Jobs declared Flash would not be supported on his iPad, iPhone and even withdrew the built in plug in on Macs. He started a crusade to rid the world of what he saw as proprietary and bad code and like it or not, force HTML down the market’s throat.

When he was forced to back track on one of his other mantras which stated developers could only use Apple tools the door started to open to Flash and wasn’t going to shut close again in a hurry. Not only have Adobe stuck their foot in the door opening but so have others such as Skyfire.

Skyfire have developed a mobile browser that not only enables users to follow links from Facebook,Twitter, iGoogle, but also play the videos shared across social networks. Skyfire success on Android demonstrates that users want all the Internet content to work on their devices and not be dependant on a WiFi connection. When Skyfire launched on Android it added over 500,000 new users in just six weeks and also reached the top 0.7% apps on the Android Market. 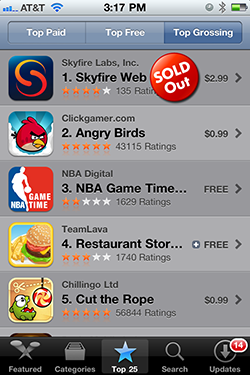 It has now become the first Flash playing app to get Apple’s approval. Such was the flood of downloads when it was released in the US that it quickly became the top grossing app and the third highest paid app overall. However their success came at a price in the demand overwhelmed their servers. Skyfire is now officially “sold out”. Robert Oberhofer on their blog said “The user experience was performing well for the first few hours, but as the surge continued, the peak load on our servers and bandwidth caused the video experience to degrade. We are working really hard to increase capacity and will be accepting new purchases from the App Store as soon as we can support it.”

What a nice problem to have!

Skyfire plays Flash video by dynamically coding video files into HTML5 in the cloud and optimizing them for mobile delivery. Skyfire’s cloud technology should make videos play faster and smoother, with less buffering and better battery life of the device. Skyfire’s cloud ensures that each video is adapted to the right bandwidth, as well as the right format.

Yes they still migrate dynamically to HTML5 but Mr Jobs they recognise the demand out there and also have adopted an innovative way to meeting it. The one clear message is that Flash and demand for Flash aren’t going away today.
Posted by Martyn Daniels at Friday, November 05, 2010