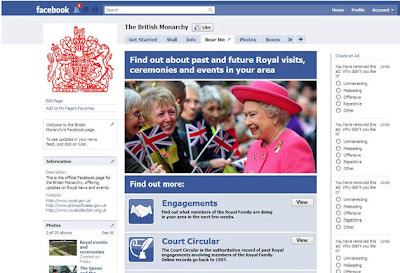 Facebook now boasts more than 500m users but can now boast royal patronage and the Queen to its list of subscribers.

The Queen is launching British Monarchy Facebook page and this follows her Flickr account earlier this year, joining Twitter last year, the establishment of a Royal Channel on YouTube in 2007 and the Queen has reportedly fully embraced the web and sends e-mails.

Buckingham Palace says that its Facebook page is not a personal profile page and users will not be able to add The Queen as a "friend", but are abler to "like" the service and receive updates on their news feed. The page will also feature the Court Circular, recording the previous day's official engagements and information about royal events and ceremonies, all searchable on a UK map.

We wonder if Stephan Fry will be upset at now being only second in line on the technology front?.
Posted by Martyn Daniels at Sunday, November 07, 2010