Just when you though it was safe to go out and the number of ebook readers was reducing we face a new bombardment by an array of new devises all hoping to catch the eye and sales. 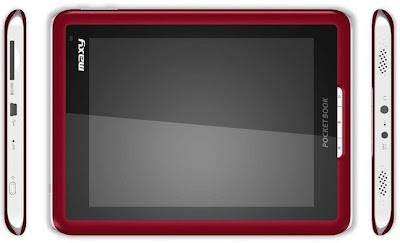 Pocketbook International announce not one but five new eReaders manufactured by Foxconn. The new pretenders are; PocketBook Pro 602, Pro 902, Pro 603, Pro 903 and the IQ. They already have a 301, 302 and 360 models! The devices will be released at IFA in September in Berlin.

The Pro 602 is a 6” screen, the Pro 902 a 10” screen with the Pro 603 and Pro 903 being premium versions with touchscreen, 3G connectivity and run Linux. The PocketBook IQ has a TFT colour 7” touchscreen display and is aimed at multimedia consumption with wifi and Bluetooth and runs on Android 2.0. 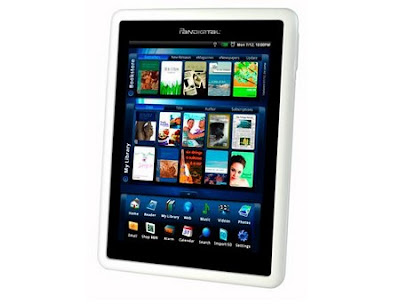 Pandigital’s has a new Android eReader with a 7-inch TFT LCD touch screen, a display resolution of 800 x 600 pixels, ARM processor, 2GB memory with SD slot, built-in Wi-Fi, web browser, a mini-USB port and has a stylus and virtual keyboard. The eReader supports PDF & EPUB e-book formats and is integrated Barnes & Noble eBookstore, but has a $175 high ticket.

The new Mirasol display is being widely shown at the trade shows but now has to be adopted by the manufacturers and step up in volume production. The interesting aspect is that Qualcomm could offer the display, the app processor, and connectivity on one chip. Certainly one to watch.

News that Aluratek Libre eBook Reader Pro has dropped in price below the magic $100 shows that these 'lookie likie' eink readers are in for a tough time as they go to commodity pricing.The 5"reader which is widely available in the US dropped in price from its previous $169 to $99 at the Newegg retail store. This one looks clunky and needs to be priced even lower to attract any attention.
Posted by Martyn Daniels at Sunday, August 22, 2010