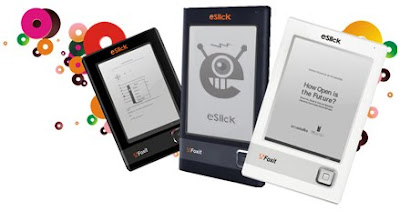 Another ebook reader has hit the exit button today. Following the demise of iRex and the Cooler ereader, a lesser known eSlick device from Foxit became the latest casualty of ‘lookie likie’ wars and tough competitive market. Foxit will also shut down is European branch and focus work in its California headquarters and licencing its software.

At $199, the eSlick was once a cheap reader but as price wars developed and everyone headed towards that inevitable $99 price point , they just couldn’t compete.

We believe that more will follow and that by next year only a handful of players will remain and they will all find it increasingly difficult as they get squeezed by price, functionality, tablets and iPad, Android devices, etc. The consolidation will have an impact on Adobe and its ASC4 DRM platform who depended heavily on a wide spread of devices and interoperable market. It will help consumer confidence by reducing the choice and price. It should help consolidate the current epub challenges.

The winners will be those who are aligned with content revenues and can cross subsidise their programmes or those with strong nerves and deep pockets. Will believe that we will still see a big casualty or pull out? Its hard to see the likes of Sony making it without digging deep into their corporate pockets, as they are not dominating the trade market and they clearly miss the education market needs. It is also hard to see News Corporation making it with Skiff and others such as Copia may have expert advice and lots of publishing knowledge behind them but just lacks that magic that makes social networking a pull and its device offer is too spread. Barnes and Noble are a technology company so it easy to see them flipping to any device. Kobo looks toi be in a strong position but is it strong enough to compete with Amazon head to head?

So who will be the next ‘lookie likie’ to fall?
Posted by Martyn Daniels at Wednesday, August 04, 2010