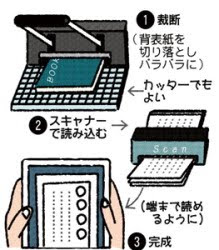 Who has not copied music and films for personal use? We can all remember taping radio music, cutting cassettes off vinyl, copying CDs and downloading files from the likes of Kazaa. We all tape TV or now simply watch it on demand. We have all updated our media libraries as we migrate to new technology. So what is different about taking a book and scanning it to create your own digital file?

"Jisui," ("cooking one's own meals"), is a new digital book community in Japan which is creating its own digital copies of books. The process is no different to what many publishers do with their back list titles and involves scanning pages of a book through a scanner. The technology has been around for years, so what has changed and why would you break a book to just create a digital copy?

In June, Internet research company Macromill Inc. surveyed 300 iPad owners in Japan and found that 20% had digitized their own books and a further 30% were interested in doing so. The reasons given by the respondents were that, digital versions of the books were not available and that it was easier to read the digital versions of books than paper books whose pages had faded. The numbers surveyed may appear small but we still have to ask what has changed and why do these people feel the urge to perform digital DIY?

First they now have an ereader they like in the iPad and we must remember that the survey was focused on iPad owners. Secondly if there is a dearth of digital content people will always create it themselves. Thirdly the scanning technology has improved and has become cheaper. Forth creating an image file such as PDF from a scan is simple. 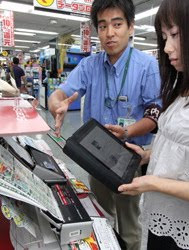 The combination of these factors has resulted in an increase in sales of related products. PFU, which is part of the Fujitsu Group, said its June sales of duplex scanners were double that of May. It is claimed that Amazon also saw orders of scanners and paper cutters double from April to June. The interest has even resulted in major electronics retailer Yodobashi Camera setting up an in-store demonstration area to show customers how to digitise books. Another company Jissen, even offers a service to cut books into loose pages for 110 yen per copy and claim to now cut between 1,000 and 1,500 books a day.

Digitization of books by the purchaser for "personal use" is permitted under Japanese copyright law as long as the individual does the reproduction themselves.

Some would suggest that copyright law is out of step with current times. Others that the practise is OK but only if it is ‘for personal use’ The professional pirate has had the capability to do this for years and can even convert captured text into any format and re typeset it for print. Until now digitisation was presumed too expensive for individuals and they didn’t have devices that made digitisation worth the effort. It is not the professional pirate that is the new threat but the individual.

"Jisui" may be confined in the main to Japan today, but it easy to see communities created to follow its example and the obvious outcome will be the sharing of files.

Fighting file sharing on a service is one thing but is often struggling under the reactive take down notices and first finding the content. Fighting copying and sharing content at the local community and friend level is completely different. As the publishing world locks up its digital files behind DRM encryption it be could merely encouraging the individual to bypass that source and go the original book and scan it. After all that is what happening with music until sense prevailed and MP3 was widely accepted.

We may think this is small and insignificant and that we should to focus on locking up the digital files whilst we also continue to fight low prices and make it expensive in the mind of the consumer. We perhaps need to be careful what we wish for and instead consider making ebooks really cheap, available and DRM free. Soft DRM, digital watermarking, makes far more sense than the current clunky hard DRM. But we appear to be hell bent on encouraging consumers to consider a DIY future.

A group of students only need a scanner and one textbook.

>> It's 'Jisui' War'! -- Digitizing books into e-books stirs the
>> copyright pot in Japan
>>
>> It's called 'jisui' and it means 'cooking your own meals'
>>
>> by Danny Bloom
>>
>>
>> TOKYO -- As the digital age grows more and more complicated, in terms
>> of copyright law and copyright theft, some Japanese companies are
>> "cooking their own meals" in a way that
>> some book publishers can't quite digest. A few enterprising firms are
>> setting up shop to digitize selected paper books into e-books for
>> individual customers. But lawyers for the
>> Japan Book Publishers Association (JBPA) say the practice violates
>> Japanese Copyright Law. Oops.This is how it happens, according to a
>> recent report in the Japanese-langauge Yomiuri Shimbun newspaper. The
>> firms remove the spines of books, scan the pages for transfer to
>> e-readers and the money is coming in. A new business blueprint is
>> born. In Japanesee, the practice cis alled "jisui" "(cooking your own
>> meals").
>>
>> It is legal for Japanese to digitize their own books for their own
>> use, according to sources, but to do it for paying customers is a
>> violation of the Copyright Law of Japan.
>> In order to get out of the tight corner they find themselves in, and
>> cook the meals properly, the half-dozen companies providing the
>> "jisui" service argue they are not digitizing books for commercial
>> use.
>>
>> Reproduction of books for private use is allowed under the Copyright
>> Law of Japan, but not for other people's use, especially paying
>> customers. And there's the rub.
>>
>> According to the Yomiuri, which has a circulation of 10 million
>> readers in a country of 125 million people, there are more than 10
>> companies currently taking orders for digitizing books, which is
>> labor-intensive and time-consuming. The companies charge from several
>> tens of yen to several hundreds of yen per book. It's not small
>> change.
>>
>> The jisui process is simple: After digitizing a book, the jisui firms
>> return the data to customers on a DVD or via the Internet, and clients
>> then transfer the data to an e-reader. Done deal. Everyone's happy.
>> Except
>> the JBPA.
>>
>> The new business idea is catching on, too. One company that started
>> digitizing books in July received orders for 10,000 books in August,
>> and the number is likely to reach 15,000 in in October.
>>
>> "[The operation of this business] might be in a gray zone in terms of
>> copyright violation," the company's PR office told a Yomiuri reporter
>> last week. "But we think there's no problem regarding copyrights since
>> we just do this on behalf of individuals."
>>
>> The JBPA does not plan to take all this sitting down. First up is a
>> plan to issue a warning against such business practives. Any
>> reproduction other than copying books for private use will be
>> considered illegal, the JBPA insists.
>>
>> So what does Japan's legal community think of all "jisui" business.
>> One lawyer who specializes in Japanese copyright law is of the opinion
>> that "while reproduction for private use can be carried out by the
>> individual who will use the e-book, it is not legal for a third party
>> to do it for payment." Case closed? Hardly. This is just the
>> beginning of the "jisui wars" set to rock Tokyo's publishing
>> juggernaut in coming years.