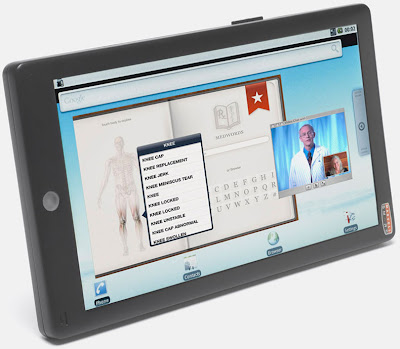 Would you buy a tablet if it cost $100 US? What if it was powered by a 1GHz Maxwell Armada 610 application processor that could encode and decode video at resolutions of up to 1080p and speeds of 30 frames per second using the H.264 codec? It supported live video conferencing, had a built-in camera and supported multiple simultaneous viewing screens? Throw in WiFi access supporting up to 8 concurrent users connected via a mobile broadband. Now lets start to wind it up further and have it supporting Flash 10, and Operating platforms such as Android, Ubuntu and Windows Mobile. Finally lets give it Bluetooth FM radio and GPS. Yes the price was $100.

It may not look like the iPad but for under 20% of the cost it delivers more than the iPad is likely to deliver for some time and like most of the real world it can multi task,doesn’t suffer from Flash denial and their are no gatekeepers saying what applications can and can't be used or even written in.

We have long supported the One Laptop Per Child (OLPC) project. What we previously covered as a rumour was announced last week. OLPC has partnered with semiconductor manufacturer Marvell to offer children everywhere a real bargin that will surely make the difference and unlock classrooms and education around the world. 'Classrooms without walls' isn’t exclusive to the third world but applies to all kids everywhere.

OLPC’s next-generation tablets will be based on Marvell's Moby reference design and are focused on developing "a range of new educational tablets" for developing and US markets. The OLPC XO tablet will have a multi-lingual soft keyboard with touch feedback and access to more than 2 million free ebooks.

Many cynics will point to mistakes made by OLPC in the past. It's as if OLPC is fair game to be knocked whilst others just bask in the media glow. Whatever the past, if OLPC and Marvel can deliver the specification at $100 or lower, they will potentially create the biggest step change possible and meet the aspirations of offering children affordable technology and education. The prize is equally as big as the dream but if they succeed, their impact may be even greater than Apple’s and we hope the big educational publishers get behind this great opportunity.

We wish OLPC success in their mission and their XO tablet. There are many children who sorely need it.
Posted by Martyn Daniels at Tuesday, June 01, 2010