The battle between Amazon, Apple and Google is heating up and each are clearly adopting different strategies and book market positions.

Following last week’s pricing gauntlet from Amazon they have now announced 'Kindle for the Android' and clearly see the 'Kindle' as a cross platform brand no longer tied to a device. There approach is simple and covers all the bases Apple, PC, eInk,Blackberry, Android where the common entity is the store and the service and the reader becomes agnostic with respect to the platform. Obviously the devices and platforms today have to be Amazon controlled with respect to buying and reading. This is AmazonWorld, an immersive closed world managed and served up by Amazon. Forget the price drop we would probably go further and make it a no brainer and set a price that would burn off virtually all ‘lookie likies’. However, that may not be in Amazon’s best interest, as these could continue to support a eInk world and avoid a straight Apple Amazon technology dog fight. Amazon handled the adoption of the agency model with great skill and what looked like a climb down to some became a quiet victory. They also avoided the contractual price fixing clause adopted by others and could pass on tax issues to those who wanted to control prices. They continue to quietly burying themselves deep into the publishing market and clearly have much to offer everyone from the author to the reader. 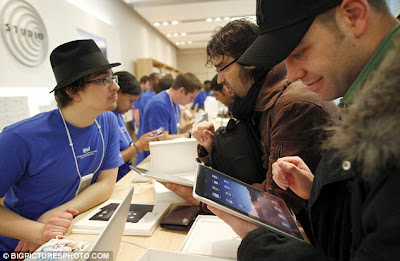 Apple makes devices and develops software. As designers their capabilities are second to none, but as media people they are second division. Their media credentials are mainly born out of iTunes and although very groundbreaking it was not YouTube nor could it defend itself against the inevitable MP3 market which forced it to open up and change. Apple is like a self contained bubble and is great until you want something outside of the bubble. Primarily its role in life is to sell devices and associated software. Its strategy is to tie devices (they have to be prefixed with an ‘I’ ), with software tools which have to be ‘approved’ by Apple, with applications and services that they control and finally with iAd advertising that they will collect revenues on. The weakness is that they can’t control the Internet so have to acknowledge others exist outside their own ecosystem and some would suggest that is hard for their leader’s ego.

Anyone who believes Apple love books should remember Steve Job’s 2008 comments on the Kindle, "It doesn't matter how good or bad the product is, the fact is that people don't read anymore... The whole concept is flawed at the top because people don't read anymore.” Also worth noting was the speed that they introduced self publishing options after wooing the publishers. 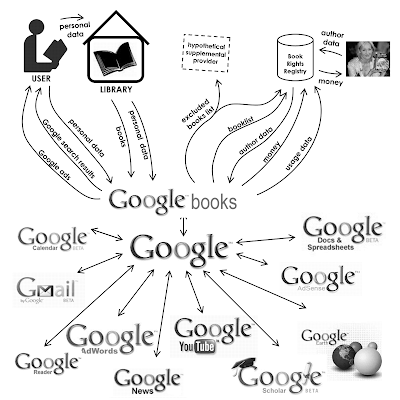 Google continues to quietly move forward into the book market. Gone are the brash days of beating the chest and ignoring the market. They have learnt that they can’t always expect to steamroller the market into their way. The Google Book Settlement may still be stuck in the courts not going anywhere fast and remain unsettled, but it has apparently taught its perpetrator much about exclusive strategies and changing the law through the back door. Google scan on regardless and continue to build their repository in the cloud. They have the biggest repository of books and cleverly don't see a real difference between rare, public domain, orphan or new front list books. Their audacious ‘land grab’ of the orphans may have been halted, but you can guarantee is not over and those who think there is little money there will we suspect eat their words.

They now are on a mission to capture the device and platform world but not through hardware, but their software and Chrome and Android systems. They continue with their Editions platform now swooning the very people who objected to the settlement, the booksellers. Their mission to control information is still on track and their ability to leverage advertising revenues to drive their business remains mostly unchallenged. They pose the most likely winner in that the are truly pervasive and everyone uses Google even if they don’t use Amazon or Apple. Denying Google is like denying technology and the Internet itself and that is why they will in the long term have the greatest impact on all. With books they will have the geatest repository of digital material and have indexed the route to the rest. They clearly have the best opportunity to create a open marketplace which is based on them collecting ad revenue.

The question who will dominate is not down to the depth of their resources, these guys don’t have the same finacial constraints as B&N, Kobo, and the rest. They will woo the author, the publisher, the bookseller but will cut out any middle men at a stroke. All will dictate their terms and their rules. All have huge plusses as to why they are where they are today and why they should succeed in the book world. But three may be one two many and if so, who is the passenger and most likely to move onto ‘other things’? Who is the Weakest Link?
Posted by Martyn Daniels at Tuesday, June 29, 2010