When Is Tablet and eBook? 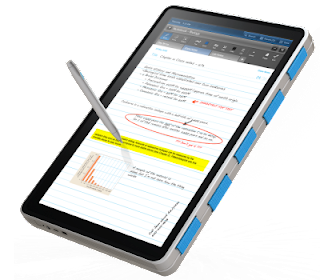 We all know that there are a number of players focusing on the textbook market and Apple is about to join them. So it was refreshing to see a new Californian start-up called Kno that is aiming to make a splash with a new tablet aimed at the same textbook, academic reference and educational space. The tablet is a clamshell style tablet and folds together just like a book and the device has also been specifically developed for the educational market. The question is whether it can it compete with Apple, Amazon and the rest or will fade like others before them into oblivion? 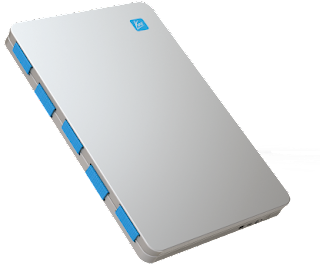 The Kno has dual touch screen 14-inch LCD displays which are obviously larger than the competitors screens and which are joined convienantly at the hip. It will support Flash, HD video, audio recording and playback along with HTML5, and users can multitask between email, text the Internet and offers a stylus for handwriting recognition, and up to 8 hours of battery life. The tablet will be powered by an Nvidia Tegra processor and has either 16 GB or 32 GB of storage The device can also fold in on itself to turn into a one screen tablet. 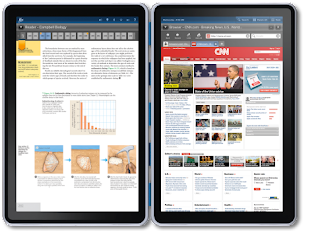 Kno was founded by Chegg founding CEO Osman Rashid and Dr. Habib, a Semiconductor physics recognized authority in electrical engineering and the design of integrated circuits. They already claim to have entered into early partnerships with McGraw-Hill, Pearson, Wiley, and Cengage Learning
The tablet which is scheduled for release at the end of this year is no lightweight weighing in at 5.5 lbs and is expected to be ‘well under $1,000’. 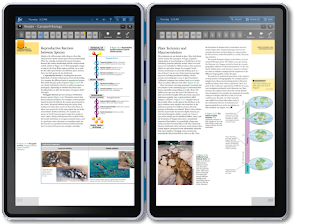 The trick is to get the content and then get the devices seen as a must have. One maybe relatively easy, but the other a lot harder.
Posted by Martyn Daniels at Sunday, June 13, 2010