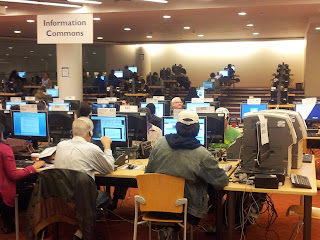 We knew an exclusive digital public library was coming and to many it makes good sense for civic communities to mix their digital and physical offer to members. Now Bexar County, Texas, has announced its plans to become the first totally digital US public library.
It is claimed that the initiative came to County Judge Nelson W. Wolff after he read Steve Jobs’s biography. He claims he was inspired to believe that future generations will have little use for hardcover or paperback renditions. As a result the new ‘BiblioTech’ system plans to make thousands of e-books available for county residents via both an online service and at a 5K square foot building and importantly offer no physical books. Not only will members be able to check out books onto their own ereaders, they will be able to borrow one of the library's 150 e-readers.
This bold step is possible because Bexar today doesn't have a civic library and currently pays and uses San Antonio city facilities. This is a new library with zero legacy inventory to deal with and therefore it can be born totally digital.
Bibliotech is in somewhat a great position to push this proposal forward, but some would question whether the $3.7 million in currently spends with San Antonio would be better deployed in working with them to create mixed environment which would serve both communities and offer the richest of both worlds. In establishing a single library entity and restricting the material on offer they may be seen by some as playing to one small community at the expense of the bigger community. Idealology over logic, personal ego over civic responsibility. To some, it would make more sense to build a state digital library, which would share cost and inventory and obviate building lots of little ones with their own unique systems, inventories and costs.
The picture is of the main Toronto City library (Oct 2012)