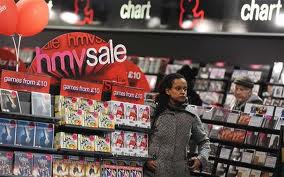 The UK  High Street casualties continue. In recent weeks more have fallen and now media HMV chain is poised to follow With administrators being appointed tomorrow.

Over the last decade the music chains that once dominated have fallen like domino and it is now hard to find any music on the High Street. The video stores have also largely disappeared along with the game stores.

Is it all down to Amazon, Apple and their online offers? Is it down to the actual music going online and streamed services such as Spotify and YouTube? Is it down the likes of Love Film and Netflix? Is it down to increasing rents and the chain’s obsession with must have prime locations?

If we were to ask shoppers what HMV stands for and about their look and feel of their stores, what would be the answers?

We would suggest the HMV not only held onto Waterstones too long they failed to recognise the convergence that was happening across media and its migration to full digital products until it was too late. As a result their store often resembled a ‘hotch potch’ of merchandising with consumers being lost wondering if they were in a music, film, game or gadget store. The layout was often clumsy and the brand message lost. Worst of all they failed to sell the digital product and create and effective online presence.

Over the last decade music changed with Napster, iTunes, Amazon, supermarkets and HMV didn't  Spotify and YouTube are now starting to further change the landscape yet HMV appears still pre MTV!
It is often easy to pretend that change will not impact the current landscape, but it will. Every sale lost to the cloud means lost shelf space. It is inevitable that as the market for physical product shrinks so shelf space has to also shrink and publishing inventory adjust. This is a fact of life and like the tide and King Cunute it isn't for turning.

The question is how we adjust the High Street offer to maintain a presence and maybe accept that the vertical chains that once dominated the media space are an inevitable casualty.
Posted by Martyn Daniels at Monday, January 14, 2013