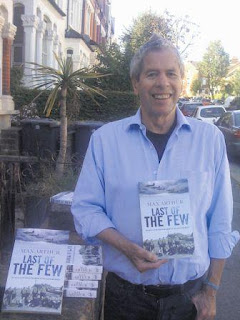 Max Arthur OBE
We are thrilled to learn today that for services to military history in this year's New Year's Honours list, Max Arthur, a longtime friend of Annie and staunch supporter of Bibliophile, has received an OBE in deserved recognition for his writing on oral military history.

Max's long list of other books include  Northern Ireland: Soldiers Talking, Men of the Red Beret, There Shall Be Wings: The RAF 1918 to the Present, The True Glory: The Royal Navy 1914 to Present , Last Post,.Lost Voices of the Edwardians, Dambusters: A Landmark Oral History, Fighters against Fascism: British Heroes of the Spanish Civil War, The Real Band of Brothers, Last of the Few: The Battle of Britain in the Words of the Pilots Who Won It, We Will Remember Them, Above All, Courage:Personal Stories from the Falklands War , The Road Home : The Aftermath of the Great War, The Faces of the Great War, Symbol of Courage: the men behind the medal, Lost Voices of the Royal Navy, When This Bloody War is Over: Soldier's Songs of the First World War, .   He has also presented two television documentaries: The Brits Who Fought For Spain(2008-9), a joint production by The History Channel UK and The History Channel Spain.