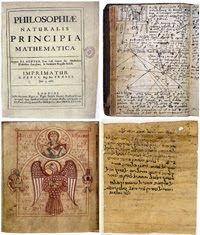 Cambridge University Library has been a legal deposit library since 1710 and since that date has acquired a copy of each book and journal published in the UK and Ireland. As you can expect this means that the libraries shelves are expanding at a rate of two miles per year and currently house some 8 million books and periodicals and 1 million maps. Cambridge University Library now is embarking on creating a "digital library for the world" by digitising its collection.

The programme follows a pledge of £1.5m from Dr Polonsky, founder of the Polonsky-Coexist Lectureship in Jewish Studies at the University.

The library contains some of the greatest books published, including the papers of Isaac Newton and a number of the oldest and most significant Qur'ans ever to be uncovered, as well an eighth Century copy of Surat al-Anfal, the eighth chapter of the Qur'an.It also holds the Jewish Taylor-Schechter Genizah Collection of some 193,000 fragments of manuscripts as significant as the Dead Sea Scrolls and one of the most important Greek New Testament manuscripts.

If successful, further funding will be sought to add the collections of Charles Darwin, James Clerk Maxwell, and Stephen Hawking, along with other major collections in the fields of humanities and social sciences.

So with national libraries all starting to have similar programmes, The British library digitising newsprint and Google hovering up anything that it can, who will have the authoritative new digital equivalent of the library of Alexandria.
Posted by Martyn Daniels at Sunday, June 06, 2010

I have been visiting various blogs for my dissertation research. I have found your blog to be quite useful. Keep updating your blog with valuable information... Regards

Professional IT certification exams prove as a doorway to keep people update about their significant fields
000-540, 1Z0-459, FM0-307, and more detail.

Fantastic blog! I don't think I’ve seen all the angles of this subject the way you have pointed them out. You are a true star, a rock star mate, You have got so much to say and know so much about the subject.

I found a lot of useful tips from this post. Thanks for sharing your sharp awareness.I liked this thought so much. Thanks a lot for giving everybody remarkable chance to read in detail from this site.