51 Million Take Down Notices and Counting 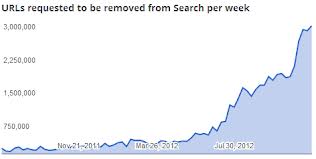 2012 appears to be the year when the surge in copyright take-down notices may have tipped search engine sites into considering proactive downgrading the results of repeat offenders or self policing by de-listing them. This action if taken will be significant step, but the sheer rise in number of take-down requests may now necessitate it being taken.
Google and other hosting services, have an obligation to remove infringing content upon receiving a valid DMCA request from copyright holders. Google publish weekly stats on the number of take-down notices they receive and process. In 2012, copyright holders requested Google to remove a staggering 51.3 million links, which is a significant increase compared to previous years. Google is currently processing half a million take-down requests per day and the number is not stable, but increasing week by week. The last week saw a record 3.5 million requests, which itself is 15 times greater than that receive in the whole of last January.
As expected the RIAA is the most active sender of requests with 7.8 million over the year. Surprisingly, the Pirate Bay were only cited in around half a million requests this year, whereas the file sharing site FilesTube topped the rankings with 2.2 million requests.
The increasing trend in requests and take-downs highlights the problem of their management and the challenges of dealing with and resolving take-down notices against legitimate content. It is therefore more likely that companies such as Google will increasingly downgrade the search results of repeat offenders and maybe even take the ultimate step and de-list them.
The current system is more of a case of ‘sticky tape and plaster’ than a resolution and as bodies such as the RIAA continue to automate their detection and servicing of notices, we appear to be climbing onto a treadmill that is just getter faster and bigger. The ideal solution for much of the copyright infringement is a open copyright register, but we have seen that the associations appear to be devoid of funds and the commitment to take that bold step and instead are happy to continue to add more sticky tape to the issue and pass the blame down the chain to the likes of Google who ironically offered one to the book industry, albeit with many unacceptable strings..