Instrgarm Raise the Digital Finger to Their Users 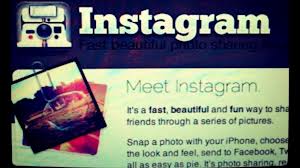 The service that shoot to fame and fortune by enabling users to share photos with friends has now taken the word 'share' and rewritten its meaning.
Take a photo load it on Instagram, share it with friends and now give it to Facebook to exploit and make money on and worst of all you can sit back and get nothing!
It doesn't sound right but Facebook's photo-sharing site Instagram has just updated its privacy policy, effectively allowing it to grab the right to sell its users' photos to advertisers without notification, or money. They have even condescended to giving all Instagram account folders a deadline date of 16 January, but also denied them the opportunity to opt out.
The changes also mean Instagram will share user information with its parent Facebook which bought it earlier this year for $1bn. The sharing of information also now extends to other affiliates and advertisers. In other words whoever they wish to share it with.
Earlier this month, Facebook's vice-president of global marketing solutions, Carolyn Everson said: "Eventually we'll figure out a way to monetise Instagram." Well, it appears it didn’t take them long to sort that problem out and now they have literally grabbed their user’s images and information to exploit as their own and for free!
International technology giants appear to be currently rewriting the rules at their whim and fancy, avoiding tax with not a blink of and eye, taking personal pictures to sell them as their own, sharing information with who they wish and generally behaving very questionably. We have seen policies such as this be reverted before, but it’s now very much a case of ‘Catch us if you can.’

Instagram, in response to the market comments and adverse reaction have now changed (or reworded) their policy

"The language we proposed … raised [the] question about whether your photos can be part of an advertisement. We do not have plans for anything like this and because of that we’re going to remove the language that raised the question....

"Ownership Rights Instagram users own their content and Instagram does not claim any ownership rights over your photos. Nothing about this has changed. We respect that there are creative artists and hobbyists alike that pour their heart into creating beautiful photos, and we respect that your photos are your photos. "