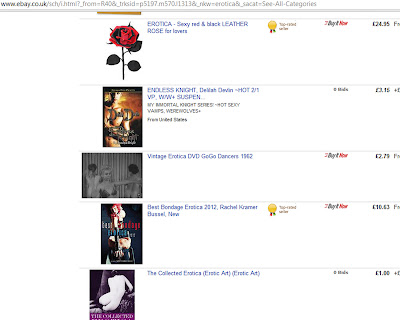 Tomorrow what we can read, watch and the art we observe may not be decided by ourselves or governments and laws but by a new breed of censors. These censors may have no qualification or experience, just the ability to switch off those who they deem unfit. It’s like a McCarthy witch hut without the senate hearings, flag beating and just a darkened room and anonymous censor.

The latest technology censor has deemed erotica and pornography the evil and corrupting element that must not pass their doors. PayPal doesn’t even host any content it merely facilitates online payments. Yes, a financial service operator is now deciding what is appropriate to read and what isn’t. It can achieve this level of moral censorship by having a virtual monopoly over the business of controlling cash transfers made via the internet and also having a dominant market share over the online self-publishing channel.

It doesn’t matter how many books are effected it is the stupidity of a censorship based on subjective and unqualified self judgement in an area that they are ill qualified to judge. Will their ban apply to physical books, art , movies, music and will they come down heavy handed on all publishers or merely the self publishing market. More ridiculous is the question of how PayPal believes it is going to enforce its moral high ground. Will they ban any site from selling Nabacov, DH Lawrence, Stig Larson, Shakespeare, Suskind, Belle de Jour, Cleland, Harris, Neret, Zola, Joyce, Nin, Miller, Reage, Swinburne, Boccaccio Etc. Many artists and photographers,such as Mapplethgorpe, Newton and many more, would fall foul of these rules. After all it is ridiculous to effective ban one form of expression, literature without impacting other forms such as art, film, photography etc.

So PayPal and others have draw the line on their own definition of obscene adult content that it believes is extreme or potentially illegal. What comes next, political expression?

Advocacy groups are considering taking on the PayPal censorship case and some have already written on the subject; Electronic Frontier Foundation (EFF), and The American Booksellers Foundation for Free Expression (ABFFE) and the National Coalition Against Censorship (NCAC).

Perhaps someone at PayPal should enter the word 'erotica' on the parent EBay's own site!
Posted by Martyn Daniels at Sunday, March 04, 2012

"Visa is not in the business of censoring cultural product. We recognize, as courts in the U.S. and elsewhere have long recognized, that this is a challenging topic. Bright lines are difficult to establish. We welcome the input of all stakeholders regarding our policies as we work to sustain a network that supports global commerce, while respecting the laws of the countries where we operate."

Some feedback we’re getting is a belief that PayPal is forcing its moral beliefs on others and restricting people’s right to free speech. We can tell you with 100 percent conviction that this is not our intention. While we understand that people don’t always agree with our policies, this decision has nothing to do with our personal views on the content or any desire to limit free-speech rights. It has everything to do with running a sound business and complying with our legal responsibilities.

PayPal is a payments company. The right to use PayPal’s service is not the same as the right to speak.