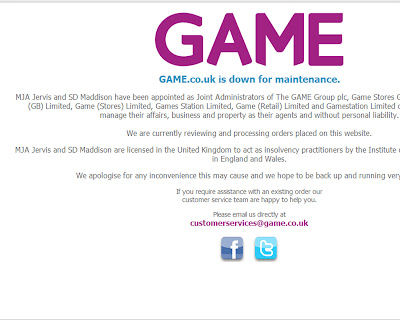 As we watch another media High Street outlet chain stumble and fall we have to ask if there is a retail future for digital media on the High Street? This may sound a very stark viewpoint but digital has changed and challenged many brick and motor stores and there are far more losers than winners and the street is becoming littered with fatalities in music, video, books and games.

Does the public want to search in-store when it can search online and get instant gratification? Do the staff in-store really want to sell something that many perceive to be eating their lunch? We have seen some bad examples of retailing of ebooks and devices in-store, but perhaps the point we have missed is that online shopping is becoming social and brick and motor is often now the opposite an interesting could be seen as anti social. This may be hard to understand as we often go shopping with others, but we don’t go shopping with potentially everyone we know in our trusted communities.

Today video games specialist Game has officially entered administration and this is expected to result in heavy job losses and the closure of up to half the it's 609 UK stores. Last year it had sales of £1.6bn but many factors have caused the demise of Game. It has not been helped by a slow down in new games from major suppliers such as Electronic Arts and Nintendo. It has also had challenging cashflow and profit issues whilst it tried to clear high rents, wages, suppler and tax bills.

So as Waterstones readies itself to launch its ereader and step up to the digital challenge we would question how it will fair. Barnes and Noble have shown that digital can work if viewed as somewhat separated from stores. Indigo happily let KOBO plough its own furrow. However looking at the retail digital in-store offers in the likes of WHS makes us beg the question of whether clicks and motoer works in this new social world.
Posted by Martyn Daniels at Monday, March 26, 2012