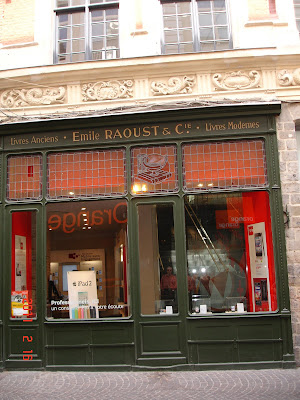 There used to be a category of retail for books at UK Companies House. There is however one for, newspapers, stationary, magazine and other, but no longer books. We also read that the UK’s Bookseller Association claim today that some 25% of independent bookshops have gone out of business in the last 5 years and we find ourselves reminded about the sign over the door of that old bookstore of Emile Raoust & Co. in Lillie that now sells mobiles.

Every action has a consequence and impact and the book market is no different. What would you think is the consequence of:

When we first stepped into the book publishing marketplace, we found it crowed, overly complex and some would suggest very adversarial compared to other markets. There was not so much a blame culture, as much as a lack of communication and understanding of others. It was as if everyone thought the other’s job was simple and the book world revolved around them. Even today, some fail to realise that there are only two people that matter, the creator/author and the consumer, and that everyone else has to earn their place in between by adding real value.

Bookselling is about what it says on the tin – selling books. Bookselling is not easy nor is it about being a super franchise shop for publishers of new books, it’s about selling books; new, old, used, remaindered, back list, specialist whatever. Despite what Companies House may think book retailing will survive but will be different and will continue to be heavily impacted by others and its own actions.

There is no divine right to bookselling and we must ask if today’s news is really surprising, or whether it’s only alarming in that it didn’t happened sooner. Perhaps Companies House spotted something before the trade.
Posted by Martyn Daniels at Tuesday, October 04, 2011