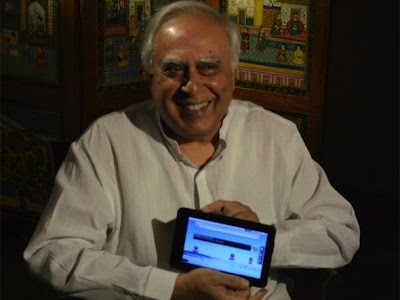 What impact would a $35 colour tablet have on the consumer, education and business? Yes we did say $35 or £23!

That sort of price would turn OLPC on its head and make cloud computing a given? It certainly raises some interesting questions about the cost of other tablets.

The Aakash (Sky) is a tablet designed and manufactured in India under a government subsidy aimed at the Indian education market and is to be also distributed to India’s small towns and villages. A potentially true OLPC strategy! They even have plans to sell the tablet internationally under the name UbiSlate and at a price of $60.Indian Human Resource Development Minister, Kapil Sibal, launched the tablet, handing out 500 units to students and announcing that they now plan to buy 100,000 of the tablets and that they hope to distribute 10 million units to students over the next few years!

The Aakash has been developed by UK DataWind and Indian Institute of Technology (Rajasthan) and is to be produced at DataWind's new production centre in Hyderabad.

Even before it has been evaluated many experts are doubting its speed, performance and touch screen capability. Some say that they have heard it all before, when in 2009, the same ministry announced the ‘Sakshat’, which failed to deliver. However, it is clear that governments realise the potential and even if the Aakash doesn’t deliver it is only a matter of time before this vision does happen.