Another day and that great river Amazon keeps on flowing. Today three disjointed pieces of news demonstrate why Amazon continues to chart its own course and is a significant publishing force.

First the fairly insignificant news that France Telecom Orange is co-developing its own ebook store as an alternative to Kindle. Orange intend to partner with rival French cellco SFR and the French Library Union and aim to develop a digital library. They believe that they can achieve their Kindle competing goals by a hosting a wider range of French titles than Amazon and will offer users the ability to pay via the mobile bill. Orange investment is claimed to be around €5m and although the French market may be seen by some as parochial, it is already getting crowded with Kobo teaming up with Fnac. We doubt Orange will make it to prize ceremony, but believe they will help raise the ebook profile in France. Forget the Orange 2011 winner,Téa Obreht and her debut novel, 'The Tiger's Wife', some would give the Fiction Prize to Orange itself.

Whilst Kobo are setting their sights on France and the UK and Orange are planning to ‘tango’ the Kindle in France, Amazon is rumoured to be entering the Japanese e-book market and to set up an online e-book store this year. The rumour is supported by claims that Amazon is in contractual negotiations with publishers such as Shogakukan, Shueisha, Kodansha, Shinchosha and PHP Institute Inc is expected to provide about 1,000 digitized titles to Amazon.

Japanese publishers have been reluctant to provide content to Amazon over concerns that the retailer will sell e-books at a discount. Although the Japanese e-book market in 2010 was estimated at only 65 billion yen ($846.9 million) the print book and magazine market is worth about 2 trillion yen. One could say the Amazon presents a clear replay of the US Black Ships that opened up Japanese trade. It is easy to see this as a clear strategic step for Amazon whilst others scrap and try to play catch up in easier markets. 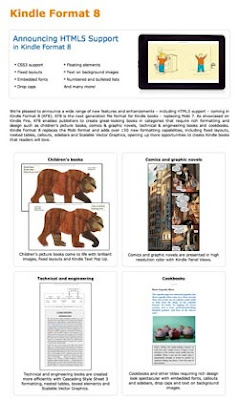 Finally Amazon has unveiled its next-generation file-format for Kindle books. Kindle Format 8 (KF8) will replace Mobi 7, and it brings support for HTML5 and CSS3. Obviously this is not epub 3.1 and some would say is somewhat behind that standard, but it may be a significant and more timely route for many and better tuned to the market.

KF8 will obviously enable publishers to create better-looking books with richer formatting, which could include fixed and floated elements, embedded fonts and drop-caps, text on background images, numbered and bulleted lists, and much more. Children’s books could now “set on Fire” with imagery, fixed layouts and pop-ups; comics and graphic novels could benefit from ‘Kindle Panel Views’; reference books could be made more attractive by superior diagrams and cookbooks and travel guides cold start to come to life.

Some will say that isn’t enough, but it enables the Kindle Fire to display the enhanced ebooks in play today and if encourages more publishers to develop the content, then it may be a far smarter move than developing standards and expecting everyone to merely adopt them. Amazon’s KF8 formatting capabilities are outlined in full on its website.

Amazon’s Kindle Fire tablet will be the first to support the KF8 with them predicting support on its latest generation of e-ink Kindles “in the coming months”, along with its free Kindle apps for other platforms.

Finally, Amazon are planning enhancements to its Kindle Publisher Tools through KindleGen 2 which will create Kindle content from sources such as HTML, XHTML, and EPUB. This will be complimented by Kindle Previewer 2 which will provide publisher previews on how titles will look on Kindle devices and apps.

The Amazon keeps flowing and appears to be still one step ahead in their planning and execution.
Posted by Martyn Daniels at Saturday, October 22, 2011