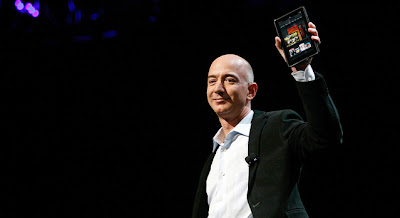 When Apple first launched its iPad2 it sold 2.5 million units in its first month and set the bar very high for all that would follow.

oday a leaked sales report on the tech site Cult of Android claims that Amazon’s new Kindle Fire has currently raked up 250K of pre orders in its first week and if that level of demand is maintained it could reach 2.5 million of pre orders alone before it goes on sale on November 15th.

Irrespective of whether the level of demand is sustained it clearly is going to be the US gift for Christmas this year and a serious Apple contender. Bezos has obviously pitched the price perfect and also has stuck to his ‘keep it simple and focused mantra’ that has enabled Kindle to become a clear contender in the emerging media player market.

It begs the question what the others will have to do to compete as Apple captures the high ticket, design icon end of the market and Amazon the low end no frills media integrated end.

It also begs the question as to how some of the other ereader players will survive not just in competing with these must have devices but also with the impact of their different but closed media and platform offers? What is perceived as an open market for ebooks could quickly change if there are two players who dominate it and this is turn may force players to look at the obvious streaming opportunities and away from downloads as we know them today.